Since humans could think, ice cream has been revered as a delectable dessert. That creamy and smooth chunk of swirled-up food is an invention like no other. And how can we resist when the temptation is placed in every store and dining hall we go to? What we do not know however, is how this beautiful concoction came about. It all started “way back when.”
The history of ice cream dates back to around the 4th century B.C., but not until 600 A.D. was the use of ice cream documented by the Chinese, during the Tang dynasty. Back then, milk and flour were combined and fermented to create an interesting kind of yogurt. Ice cream did not yet have the great taste we attribute to it today; in the past, it was more like a milky paste. Only when the 1500s and 1600s arrived did the former begin to melt and people experimented with the flavor and the ingredients until both water ices and general ice creams were formed. Ices and sherbets were prepared in Europe, particularly  in Italy and France, and they were mostly crispy. Ice cream did not attain its creaminess until the mid-1700s when they discovered that adding egg  yolks  and  cream  gave  it  a  smooth  texture; it  took about a decade longer for it to reach America.
Before it was made available to everyone however, it was only the wealthy that had the opportunity to enjoy. They had the money to pay for the ice to make the dessert, which was both a rarity and a symbol of high status. When it did reach America, ice cream was just another luxury the poor were not able to afford. Ice houses were built and even though these were mostly used for preserving meats and other foods, some of the ice they had helped to make the dessert.
By the turn of the 20th century, modern refrigeration was introduced as a widespread invention, and ice cream became easy to be stored and conserved. Now, everyone could enjoy a scoop. Even the soldiers during World War II enjoyed a taste; ice cream was made by placing the ingredients in a bucket at the back of a fighter plane, which would be churned up by the motions. It was a small pleasure for the soldiers taken into battle.
From the 1940s to 1970s, ice cream gained even more popularity with the general public, as it was packaged and sold in supermarkets, then ice cream parlors and soda fountains came about. At the end of the 19th century, the first root beer float was invented by a man named Frank Wisner. In 1920, Harry Burt made the Good Humor Ice Cream Bar and is credited as being the first to sell them in a white truck with a bell and uniformed driver. In 1956, Leo Stefanos became the inventor of the Dove ice cream bar. In 1960, Reuben and Rose Mattus started the Haagen Dazs business. And, in 1978, Ben Cohen and Jerry Greenfield opened up their first gas-station-turned-ice cream parlor. The popularity of ice cream skyrocketed and everyone wanted to enjoy the delicious creation.
Now, with hundreds of flavors out there to choose from, Americans have the opportunity to dig into their favorite dessert. Although fall and winter are fast approaching, there is still time to take a break and bite into that tasty dessert packed with rich history and an incredible amount of perseverance. Unless, of course, you’d like to eat it throughout the cold seasons, as well–in which case, bon appetit! 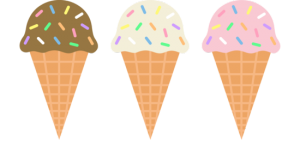