On February 15, Ray Rice and his then-fiancee, Janay Palmer, got into an altercation in the elevator of an Atlantic City casino. Only four days later, a video was released by TMZ containing Rice, now a former all-pro running back for the Baltimore Ravens, dragging a seemingly unconscious Palmer out of said elevator. On March 27, Ray Rice was indicted by an Atlantic County grand jury on a charge of aggravated assault. He pleaded not guilty and was accepted into a program for first-time offenders that would acquit him of the charges after a year.

On July 24, NFL Commissioner Roger Goodell decided to hand Rice a two-game suspension after speaking with him and Palmer, deliberating on a decision that is embarrassingly and insultingly insignificant, even though he claimed he had not seen the video. He questioned Palmer in the same room as Rice, which is a heinous act of malpractice due to the obvious dynamics of an abusive relationship. This punishment comes in direct comparison to Cleveland Browns wide receiver Josh Gordon’s year-long ban for smoking marijuana, violating the NFL’s substance abuse policy.

Nearly a full month later, only after receiving harsh criticism about Rice’s punishment, the NFL changed its policy on how to deal with acts of domestic violence. The rule now calls for a six-game ban for the first offense under the personal misconduct policy. As the old saying goes, too little too late.

On September 8, the full video was magically found and released. It shows a truly stomach-turning video of Ray Rice, the previous hero of millions of children, men and women, acting out exactly what we already knew happened in that elevator.
Goodell and the NFL suspended Ray Rice indefinitely only after the Baltimore Ravens terminated his contract and released him. That Monday afternoon, Goodell swore in an interview that he and no one else in the league office ever saw the full video before. The next day, September 9, the Associated Press reported that an official in the NFL office had the full video in April and that there is a voicemail confirming receipt. This leaves everyone involved in the incident, the Atlantic County District Attorney’s office, the Baltimore Ravens and Goodell to have either intentionally or with negligence, lied and covered up for Rice and as a result, treated a disgusting act of domestic violence as insignificant.

The only reasonable course of action now seems clear: everyone involved in the decision to suspend Rice for just two games should resign or be fired. The District Attorney’s office, whose job is to keep the justice and protect people under the law, failed to do so. As a result, they don’t deserve the privilege and honor that comes with the responsibility of protecting the public. Goodell, who suspended New Orleans Saints Head Coach Sean Payton in 2012 during the “bountygate” scandal because he failed to control what was going on in his organization, should, at the very minimum, get a taste of his own medicine if someone in his organization had the video and he didn’t know about it.

However, Goodell’s unbelievable decision has left football fans around the nation between a rock and a hard place. Do you stop watching football because of the way the league handled it? The only way that NFL owners might fire him or force Goodell to resign is if sponsors drop the NFL, whose ratings are unimaginably high. That in turn leaves the sponsors in a terrible place. If Coca-Cola, for example, took their advertisements away, a number of other companies would readily snatch up the valuable advertising time.

In a terrible catch-22, Goodell’s termination will be reached sooner or later. If not, it enables domestic violence and a culture that says you can get away with it. 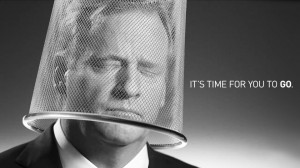