This past summer, there was no bigger story in the sports world than that of Michael Sam. Sam made history by becoming the first openly gay man to be drafted to the NFL when the St. Louis Rams took him in the seventh round. Sam played college football at the University of Missouri and in 2013 won the co-SEC Defensive Player of The Year award. Despite being recognized as one of the top defensive players in college football, NFL scouts and experts questioned Sam’s ability as a player and whether or not the media distraction that came with him would ultimately be worth it. This preseason, Sam proved he belongs on an NFL roster after recording three sacks, two quarterback hits, and four quarterback hurries in just 77 pass-rush attempts.

Unfortunately for Sam, the Rams released him in the final round of cuts. This didn’t come as much of a surprise due to the Ram’s impressive depth at defensive end. It is also a fair assumption that Sam was released due to the constant media attention that surrounds him. ESPN even went as far as to issue a report detailing his showering habits, which rightfully received extreme backlash from athletes and fans alike.

Shortly after he was cut, Sam signed a contract with the Dallas Cowboys, a team that loves making the headlines and needs help on defense. Sam is currently a member of the Cowboys’ practice squad, but don’t expect him to be there for long once the Cowboys’ defense starts to show its weaknesses. Dallas fielded a historically bad defense last year that ranked last in the league in yards allowed per game and 30th in passing yards allowed. The Cowboys also struggled getting to the quarterback, and in today’s “pass-first” NFL a lack of a pass rush can only spell disaster for a franchise. Sam will be strongly considered for a promotion to the active roster once the Cowboys’ lack of depth on the defensive line starts to manifest.

Whether he admits it or not, the addition of Michael Sam is a great PR move for Cowboys owner Jerry Jones. Jones has been heavily criticized over the past decade for his overwhelming hands-on approach to ownership and outlandish comments regarding his team. This past week, Jones’ reputation took a nosedive after a 27-year-old woman accused him of sexual assault, stemming from a 2009 incident in Dallas. Even if this suit turns out to be a shakedown attempt, Jones cannot afford this kind of negative attention. It may be safe to say that bringing in Michael Sam was one of the few positive decisions that Jones has made this season.

This past week, the NFL hit an all-time low with Ray Rice’s disturbing assault of his wife and Adrian Peterson’s appalling beating of his four-year-old son. The league desperately needs players that are not only inspiring on the field, but off the field as well. Michael Sam has shown great charisma and courage by coming out, and his story is nothing short of inspiring. He will be a starter in NFL and become not only a great player, but also a symbol of hope for anyone that is persecuted because of who they are. 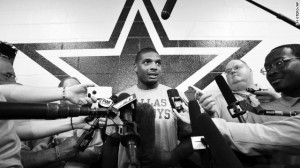