In 2013, the Pittsburgh Pirates broke their streak of 22 consecutive losing seasons and made the playoffs. This year, another such streak looks like it will be broken.

The last time the Kansas City Royals made the playoffs was their World Series season in 1985, and  they have been a picture of futility ever since. This season we have seen a Royal revival, one that looks to push this team into the postseason in 2014 and beyond. Following a promising 2013 season, the Royals have lived up to the hype.

Anchored by a strong pitching staff led by James Shields and closer Greg Holland, the Royals have posted a 82-67 record so far. Kansas City has leaned heavily on Shields this season, who has posted a record of 14-7 with an ERA of  3.13 and of his first 30 starts this season, 20 have been classified as “quality starts”.

At the back end of the bullpen, Kansas City boasts one of baseball’s most dominant closers with Greg Holland. Holland is ranked fourth in the MLB with 43 saves, while blowing only two. As a staff, Kansas City’s pitching ranks in the top 10 in baseball in ERA and quality starts.

The Royals’ offense should not be slept on either. As a team, they rank in the top 10 in hits and batting average. Kansas City has a strong and balanced lineup featuring Billy Butler, all-stars Salvador Perez and Alex Gordon, Eric Hosmer, Alcides Escobar and Lorenzo Cain. Gordon leads the team in Home Runs, RBI’s and on-base percentage, while Escobar leads in hits. Gordon has been the driving force of this Royals lineup, emerging as a clubhouse leader and fan favorite. He has been not only a reliable offensive weapon but a superb defender as well. In the six games that Gordon missed, the Royals had just one win. He has been showered with MVP chants by the hometown fans, and although he won’t win the award, Gordon’s ability is finally coming to light after seven major league seasons.

One of the more underrated players on the Royals is Lorenzo Cain. Cain has a .298 average while stealing 25 bases and  compiling a solid OBP above .320. Essentially, Cain is a poor man’s Jacoby Ellsbury; he does not hit much for power but he has the speed and makes contact.

Royals fans no longer come to Kauffman Stadium with their infamous paper bags on their heads in shame. They now come to cheer on their team who are on the cusp of a playoff berth. Kansas City is  currently duking it out with the Detroit Tigers for control of the AL Central division. Even the race for the two American League Wild Card spots are as tight as can be, with at least four teams within reach. If the Royals don’t win the division they still have a good chance at obtaining a Wild Card spot.

This year’s race to October is shaping up to be a very interesting one to say the least. With a playoff spot in their grasp, Kansas City can finally break its playoff drought and give their fans something they haven’t seen in 28 years: October baseball. Leave those paper bags at home fans, your Kansas City Royals are here to stay. 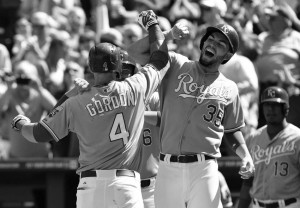