On Wednesday, September 10, SUNY Oneonta invited author Kimberly Elkins to campus for a reading of her debut novel, “What Is Visible,” for the first Red Dragon Reading event of the semester. The novel, a fictional biography of a real woman, tells the story of Laura Bridgman, the first blind and deaf woman to become well-educated in the English language.

Bridgman lost her senses of sight, hearing, taste and smell at the age of two and spent her adolescence at the Perkins School for the Blind under the care of Dr. Samuel Howe. Laura eventually garnered worldwide recognition and fame for her accomplishments, receiving thousands of visitors from all over the world including renowned guests such as Charles Dickens, who became fascinated with the young woman.

The novel chronicles the story of Laura Bridgman through the point of view of key people in her life, including Dr. Howe, Howe’s wife, Laura’s teacher at the institute and Laura herself, who serves as the main narrator. In “What Is Visible,” Elkins accomplishes the difficult task of telling a story with a narrator whose point of view can only be told through interior monologue. Elkins succeeds in bringing herself and the reader into the mind of an extraordinary woman who lived over 150 years ago and telling her story through the only voice she ever knew: her own.

Before beginning her reading, Elkins introduced Laura Bridgman and provided the audience with some background information on the life of this remarkable woman. Elkins then followed with a reading of two passages from the novel. In her soft-spoken voice, Elkins read a passage from the prologue, wherein an aging Laura Bridgman meets the young Helen Keller, whose fame would eventually surpass her own and ensure her fall into historical obscurity. After finishing the prologue, Elkins introduced and read the second passage from her novel. The selection that she read took place when Laura was fifteen years old.

After concluding her reading of the two passages, Elkins answered questions from the audience and was able to provide an insight into how much effort and dedication goes into writing novels, particularly in a genre where factual accuracy and a wealth of knowledge are of paramount importance. 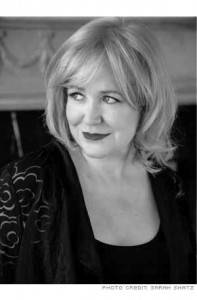 Published in June of 2014, this debut novel has garnered critical acclaim. “What Is Visible” has been featured on the cover of the “New York Times Book Review,” an outstanding accomplishment for any writer. The reviews for the novel have been exceptional and it has been called “The art of fiction at its best” by National Book Award winner Ha Jin, “A compelling, deeply moving novel” by Pulitzer-prize winning author Robert Olen Butler, and “An astonishing debut” by best-selling author J. Courtney Sullivan.

The novel has also been chosen as the Most Inspirational Book of 2014 by “Woman’s Day” and as the Fiction Pick of the Month for June by “Bookpage.”

[Editor’s Note: the next event in the Red Dragon Reading Series will feature D.T. Max, a Harvard graduate and staff writer for The New Yorker. The event will be held at Craven Lounge in Morris Conference Center on Monday, October 6th, at 7:30 pm]