Last week both the men’s and women’s finals of the US Open held at Arthur Ashe Stadium in Flushing, New York had their own sense of drama, but in different ways.

In the men’s final, Marin Cilic of Croatia defeated Japan’s Kei Nishikori in straight sets (6-3, 6-3, 6-3) to win the first Grand Slam of his career. It was a shock that either of these men made it to the last round, considering that neither had reached the final round of a major before and who they beat to get there. In the semis Nishikori, the tenth seed, upset Novak Djokovic, the top seed in the tournament and currently number one in the world in four sets ( 6-4, 1-6, 7-6, 6-3). Just as impressively Cilic, the 14 seed, upset second seeded Roger Federer in straight sets (6-3, 6-4, 6-4).

While most tennis fans and sponsors were hoping to see Federer and Djokovic, the two titans of the game (especially with Rafael Nadal out with a wrist injury) square off in the finals, it was a nice change of pace to see different names playing for a major title. This was Cilic’s first major title and first time playing at the US Open since 2012, after he was suspended for taking a banned stimulant in a glucose tablet.

Nishikori was also the first Asian man to advance to the final round of a singles major, showing that this brand of tennis is starting to travel all over the world. The US Open is the final major of the calendar year, but both men hope that the momentum they have gained from this tournament will continue to the Australian Open in January.

The women’s final of the tournament featured two of the biggest names in the WTA. The United States’ Serena Williams, the top ranked female tennis player in the world, dismantled tenth ranked Caroline Wozniacki in straight sets (6-3, 6-3)  to win her 18th grand slam singles title and third straight U.S. Open title. Serena will head into 2015 and looking to get even closer to Margaret Court’s record 24 career grand slams.

Wozniacki, a former number one player seemed overmatched in every facet of the game, but she should not feel bad about her performance. Williams dominated everyone she played against, failing to lose a single set, or even lose more than three games in a set.

Wozniacki is still looking to win her first grand slam title, but may be turning her career around after recent struggles. She seems to have refocused her game after her break up with the number one ranked golfer in the world, Rory McIlroy. At one point, she was ranked 18 in the WTA and looked  lost on the court at times. Tennis is a more entertaining sport to watch when there are more people who are able to win majors and Wozniacki is one of the biggest threats to knock off Serena.

After the despicable play of both the Mets and the Yankees this season, the 2014 US Open was a welcome sight for New Yorkers who were looking for some entertaining sports to watch. 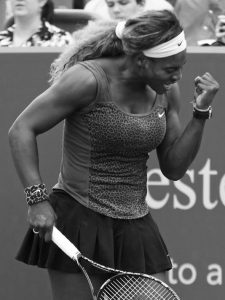