On August 7, legendary United States and Major League Soccer midfielder Landon Donovan announced that 2014 would be his final season of professional soccer. During his 14 year career, there wasn’t a  more notable name or face representing America in “the beautiful game.” He has competed in three World Cups (2002, 2006, 2010), as well as the English Premiere League (the top league in England), the Bundesliga (the top league in Germany) and the MLS.

While the MLS may not be up to par with the other American sports leagues in terms of attendance and viewership, it was not uncommon to see Donovan on the Top 10 plays on SportsCenter, making a highlight reel goal or an assist on a beautiful cross into the 18 yard box. In his 321 career MLS games with the San Jose Earthquakes and the Los Angeles Galaxy, Donovan has compiled 141 goals, a league record. He is also a six-time MLS XI midfielder and won the 2009 MLS MVP.

There is no denying that his personal stats are impressive, but the consistent success his teams have enjoyed should also be noted. As a member of the San Jose Earthquakes he won two MLS Cups (2001, 2003). Then with the Los Angeles Galaxy he won three more (2005, 2011, 2012) while finishing as a runner-up in 2009.

To the casual soccer fan Donovan will be best remembered for his work with the United States Men’s National Team. During his run on the USMNT, Donovan has set team records for most games started (140), most goals (57), most assists (57) and most points (114). In two of the three World Cups that he participated, the  U.S. had advanced past the group stage.

The World’s biggest stage is where Donovan had his most memorable moment. In the final game of the Group Stage in the 2010 World Cup in South Africa, the USMNT needed to beat Algeria in order to advance to the knockout round. They had a clear goal taken away from them in their previous game against Slovenia, but the line judge called midfielder Maurice Edu offside off of a free kick by Donovan.

With time running out against the “Desert Foxes” and a U.S. elimination looking likely, the entire fan base held its breath. But in stoppage time, Donovan pushed a Clint Dempsey rebound past the Algerian goalie. For one of the few times in American sports history, fans treated soccer as an equal to the “American” sports.

But the good feelings didn’t last between Donovan and the USMNT. Before the 2013 Gold Cup, Donovan announced that he wouldn’t be participating in the tournament and would go on a “sabbatical.” While the team  still won the tournament, Head Coach Jurgen Klinsmann was not pleased. In response, Klinsmann left Donovan off the final roster to go to Brazil for the 2014 World Cup. Donovan’s skill and experience may have helped them advance further, but Klinsmann showed that no player, regardless of  skill level, will get preferential treatment.

As time went on, both sides reconciled and Donovan has agreed to appear in one more International Friendly for the USMNT. On October 10, in Connecticut against Ecuador, the American Outlaws will have their last chance to say goodbye to one of the best in this country’s history. While he may retire, his influence will continue to live on in youth soccer. If there is a child playing soccer and wearing number 10, there is a good chance they are honoring Donovan. 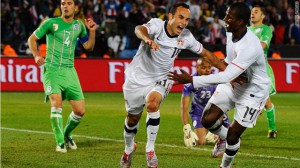