On August 23, the New York Yankees held a special pre-game ceremony honoring former manager and recent Hall of Fame inductee, Joe Torre. During the celebration, Torre’s number six was retired and a plaque was unveiled in famed Monument Park listing all of his accomplishments, including four World Series Championships (1996, 1998-2000), six American League Pennants (1996, 1998-2001, 2003) and a record of 1173-767-2. He was the 17th Yankee in team history to get his number retired.

During Torre’s 12-year run as manager (1996-2007), his calm demeanor helped keep the pressure off of the players in front of the ruthless New York media. Throughout his tenure in the Bronx, Torre always seemed to have a solid nucleus of players who were always trusted to check their egos at the door and commit to playing team baseball.

This mutual admiration was shown by the well-known names of his former players who came back to Yankee Stadium to congratulate their former boss. Former Bronx Bombers Paul O’Neill, Tino Martinez, David Cone, Andy Pettitte, Hideki Matsui and Jorge Posada were all greeted by raucous ovations from the Yankee faithful and received adulation from Torre during his speech. Mariano Rivera was supposed to attend, but could not due to travel issues. Watching from the Yankee dugout was current shortstop and future Hall of Famer, Derek Jeter, who will have a similar day honoring him on September 7.

But when Torre was originally hired in 1996, there was no great fanfare in the media or from the fans. Before his first season, the Yanks had not won a World Series since 1978. They made the playoffs in 1995, managed by Buck Showalter, but were eliminated in an epic five game series against Ken Griffey Jr. and the Seattle Mariners. There was finally hope again in the organization. A crop of young prospects were showing their potential (Jeter, Posada, Pettitte) and they finally had a manager who had some sort of playoff experience (Showalter). But in a questionable move, Showalter was fired by George Steinbrenner, the hot-head owner at the time.
After the 1995 season, the Yankees hired Torre to bring New York back to the Promised Land. In Torre’s previous stints as manager with the New York Mets, Atlanta Braves and St. Louis Cardinals, he compiled a mediocre record of 894-1003.

After his hiring, the New York Daily News dubbed Torre “Clueless Joe” as a short term manager who would not be able to stand up to Steinbrenner. As history shows, Torre’s demeanor kept Steinbrenner calm and the Yankees won four titles in his first five years at the helm, including a Championship in 2000 against the New York Mets.

But after that final championship he won in the “Subway Series,” Steinbrenner and General Manager Brian Cashman changed the way they built their team. Their main goal was no longer to build a team through their farm system and sign players of high character. Instead they went after the biggest names, who seemed only to care about their own personal stats. The signings of Gary Sheffield, Jason Giambi, and the eventual trade for Alex Rodriguez created a culture shift in the locker room. New York continued to make the playoffs from 2001-2007, but Torre was never able to get that elusive fifth ring.  During the 2007 ALDS against the Cleveland Indians, Torre made a managing move that he deemed his worst mistake during his Yankee tenure. During Game 2, the Yankees led the Cleveland Indians 1-0 and in the bottom of the eighth, Torre put in rookie phenom Joba Chamberlain to pitch. But in this inning, a swarm of small insects known as “midges” swarmed Cleveland’s stadium, making it impossible for Chamberlain to focus.  In that inning, Chamberlain threw two wild pitches, allowing Cleveland to tie the game, as the Indians ended up winning Game 2 and the series in four games.

After this playoff failure, the Yankees only offered Torre a one year deal. With Steinbrenner no longer in charge, the power of the franchise went to his sons, Hank and Hal. Torre refused the one year contract and went on to manage the Los Angeles Dodgers. After he retired from managing, Torre co-authored a book with Sports Illustrated’s Tom Verducci  known as “The Yankee Years”, which went in depth about the struggles he went through during his tenure in the Bronx. As time went on the old wounds healed and Yankee fans finally got to celebrate one of the greatest managers in history. 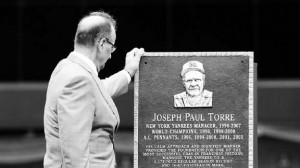