On June 12, the 2014 FIFA World Cup will officially kick off in Brazil. While the United States Men’s National Team had an easy time during the qualification rounds, having the same  success on the world’s biggest soccer stage will be difficult. When the official World Cup drawing took place on December 14, 2013, it was announced that the United States (ranked 13) would be placed in Group G, along with Germany (2), Portugal (3) and Ghana (38). With all of the high ranked teams, this group was dubbed “the Group of Death.”

There are no lack of story lines for the USMNT going into the summer. The Americans are going to be looking for revenge against Ghana after the African nation has eliminated the Americans in the previous two World Cups. In addition, United States Head Coach Jurgen Klinsmann will face a German squad who he played for from 1987 to 1998 with 108 caps. Then in 2004, Klinsmann was named the head coach of the German National Team and coached his squad to a third place finish in the 2006 World Cup.

If the USMNT is going to have a successful Cup run, all of the players will need to perform at a high level. In goal, Tim Howard has been one of the steadiest keepers in the world. He has 27 shutouts in 97 career international starts, and was named the starting goalkeeper of the 2010 World Cup squad. Howard recently signed a two year extension with his domestic club, Everton in the English Premier League until 2018. If Howard gets injured, the USMNT has a more than capable backup in Brad Guzan.

Midfield is also one of the strengths of this team. With Landon Donovan, Clint Dempsey, Michael Bradley, Jermaine Jones and Graham Zusi, the United States has a plethora of options. Bradley is the most important player at this position, often starting the plays that lead to good scoring chances. It will be interesting to see if Jones gets a starting job alongside Bradley. During recent friendlies,there has been a noticeable lack of chemistry between the two players. Even though Dempsey has not been in his best form since his transfer back to the MLS, the captain will be need to come up in big situations. During the qualifying schedule, Donovan missed games because he was on what he dubbed a “sabbatical.” Don’t be surprised if he is not given a starting job because of all of the time he has missed with the team.

A major question on this team is the defense. There are plenty of names in the running for one of the coveted starting back four spots, including DeMarcus Beasley, Michael Parkhurst, Omar Gonzalez, Matt Besler, Geoff Cameron and Fabian Johnson,but it is unclear who will get the starting job. It seems as though Cameron and Johnson will be two of the starters, but the other two spots will be up to what Klinsmann sees in training. Regardless, this back four will not scare the likes of Cristiano Ronaldo or any other star strikers.

Another issue with this team is at the forward position. It was once thought (quite recently) that Jozy Altidore was going to be one of the starters, but his lackluster play with Sunderland may carry over to international play. Altidore is a very streaky player. Fans and coaches alike can only hope he gets back in form. Look for both Eddie Johnson and Chris Wondolowski to be named to the final squad as well.
For one summer month, 32 nations will be battling each other in an attempt to achieve glory. Is it June yet? 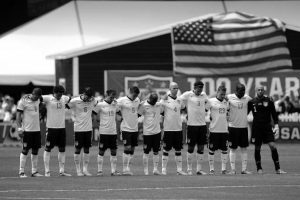