April is Sexual Assault Awareness Month, and SUNY Oneonta’s campus is taking the time to focus on healthy relationships and issues that affect college students across the country every day. SAAM (Sexual Assault Awareness Month) is a campaign that provides tools for healthy sexuality and promotes a foundation for healthy relationships. It also offers advice on how to prevent sexual violence.
According to the organization One in Four, more rapes happen across college campuses than in any other public environment in the country. In fact, approximately 1-in-4 women reported surviving rape in college while, 1-in-5 women will be raped in high school:  over half of all rapes happen on a date. Even more shocking, according to National Crime Victimization Survey conducted over the last 10 years, only 30 percent of all rape survivors will report their attack to the police.
While these statistics are alarming, there are things both men and women, can do to prevent sexual assault. Things like being aware of your surroundings, trusting your instincts and avoiding situations where one is isolated with someone they don’t know or trust can help reduce someone’s risk of being sexually assaulted. When at parties, it is important to make sure your drink is not unattended and not to accept drinks from people you don’t know or trust.
There are many things men can do to help prevent sexual assault as well, as sexual assault is not merely a women’s issue. Although 99 percent of rapes are caused by men, this doesn’t mean one should infer that all men are sexual predators. No matter one’s gender, sexual assault can happen, and it is therefore important that in the college environment we create a safety net amongst our friends, both male and female.  Watch out for friends at parties, intervene in a situation that you feel is unsafe and remain at the scene as a witness. All of these things can reduce the risk of assault.
However, being aware of sexual assault, and being overly cautious should not be necessary. The idea that a female, or even a male is the cause of their own rape is not only outrageous, but wrong. Rape is not something that one deserves for how they act, where they chose to be, or how they dress. Rape is something that shouldn’t happen. Not only do we need to be aware, we need to practice and perpetuate the belief that rape is horrible and wrong. Rape culture is something that is unacceptable, and this is what all should and must be aware of.
If you know someone who has been sexually assaulted, listen to them and encourage them to seek help.  According to the Rape, Abuse & Incest National Network (RAINN), sexual assault is a crime that takes away an individual’s power. It is important not to pressure or place judgment on someone who has been sexually assaulted. No matter what the circumstances, and no matter what precautions were or weren’t taken, rape is never the victim’s fault. Encourage your friend to seek medical help at a hospital and report the crime to law enforcement. They can also seek professional help through the National Sexual Assault Hotline, at 1-800-656-HOPE. 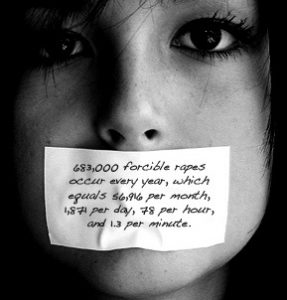