On April 19 SUNY Oneonta’s Japanese Anime & Media Club hosted its 2nd annual A-LOT-A-CON convention, and well, it was “a lot” of fun. Convention chair and SUNY Oneonta senior, Jared Townsend, dubbed the event, “Alotacon II: Return of the Fist!” a name poking fun at a miss-spelling of the word “first” in the previous convention’s con book. Townsend brought the convention to SUNY Oneonta as the Japanese Anime & Media Club’s main event of the year, in order to bring in more membership to the club. Many colleges and universities across the nation hold Alotacon-like conventions, including SUNY schools such as University of Albany and University at Buffalo.
This year’s convention was held at Hunt Union, and had a schedule packed with events throughout the fifteen-hour day.  Overall, the convention reached an attendance of seventy people, less than last year’s attendance of around one hundred. Townsend speculates that this was due to the narrow time frame available to host the event, and that leaving the convention’s time slot for Easter weekend may have hindered attendance.
The convention’s most popular events included: ‘Whose Line is it Anime?’ a spin-off of popular TV show, “Whose Line is it Anyway?,” as well as Convention Horror Stories, Ninja, and an Evil Laughter Competition. SUNY Oneonta’s Dragon Lair was also a hot spot throughout the convention.
In addition to the popularity of such events, another successful aspect of the convention was “The Artist Alley” where numerous anime and fantasy based artists show off their craft, both to promote and sell to convention attendees. These artists often range from non-professional to professional. Among these artists was Christian N. St. Pierre, who resides in the Albany area. He illustrates for comic books, fantasy novels and games. St. Pierre works with pencil, ink and in digital form as well. Often his commissioned pieces take a number of days to complete. He explained that for comic and fantasy work, authors will give him a range of character descriptions, and that he may illustrate at his leisure. St. Pierre is a frequenter of conventions likeAlotacon and said that he hoped SUNY Oneonta’s event would continue to grow in size and reputation.
In addition to artists, the convention’s two special guests, SUNY Oneonta mathematics professor, Joshua Palmatier and SUNY Broome Community College reference librarian, April Steenburgh, were happily in attendance. They held a panel called “Crowdfunding and Publishing” with the intention of sharing their personal experiences with the ups and downs of nontraditional publishing via sites such as Kickstarter and Indiegogo. Palmatier hails from Coudersport, Pennsylvania and he has been writing science fiction, fantasy novels and short stories since the eighth grade. Today Palmatier has a number of published novels and anthologies under his belt. His first novel, The Skewed Throne, hit the press in 2006, and is now joined by the sequels, The Cracked Throne and The Vacant Throne. He is currently working on the start of a series set in the same world as the Throne series under the pseudonym Benjamin Tate. In addition to this, Palmatier has started  his own small press company, Zombies Need Brains LLC. His first book to be published under this is the anthology, Clockwork Universe: Steampunk vs. Aliens.
April Steenburgh, a close friend of Professor Palmatier’s, is an author, freelance editor, and eBook formatter.  Steenburgh has launched two fantasy anthologies through crowdfunding platforms, and she often assists other authors with their own crowdfunding projects. In July of 2013 Steenburgh and co-editor Christy Lennox edited and published the anthology, “Fight Like a Girl” a collection of short stories exploring a strong female, apparently something that is unusual to fantasy fiction. In fact, Steenburgh’s description of the book reads, “This short story anthology explores the strong female protagonist in a genre where the female is typically the ‘damsel in distress’ from warriors to librarians, mothers to thieves– they all have what it takes to fight like a girl.” Steenburgh spoke proudly of this anthology, explaining that it gave many authors the chance to get their writing published, whereas they might not otherwise have gotten the chance. She already has another anthology in the works.
The Alotacon convention, although young in its SUNY Oneonta presence, was rich with entertainment, camaraderie, talent and experience. With this being said, there is hope that it will be an event that continues to grow, and that may be held at SUNY Oneonta for years to come, an attraction for people of all ages, and from all walks of life. 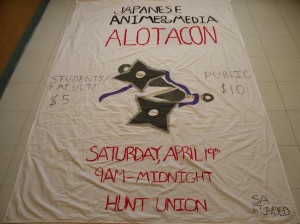