One year removed from winning their first division title since 1994, the New York Knicks are giving their best effort to show that last season was a mirage. After knocking out the rival Boston Celtics in the first round of the playoffs, fans had much to cheer about. Subsequently, they were bounced in round two, but many wondered if the glory years for this team were on the horizon. But when they began the 2013-2014 campaign 3-13, that thought was quickly eradicated.
After their first 16 games, Carmelo Anthony was quoted saying, “We are the laughing stock of the league.” This came right before a nationally televised game that featured the Knicks and Nets. At this time, both teams were abysmal. What started out as the battle of supremacy in New York looked more like the race for mediocrity. To the delight of Nets fans, their team has rebounded nicely. Brooklyn has solidified themselves as contenders in the Eastern Conference. But Knicks fans aren’t as lucky. Their team has missed the playoffs and handed the Denver Nuggets their lottery pick to make matters worse.

For a team that won 54 games a season ago, it’s difficult to understand why they’ve done so poorly. With the departures of Steve Novak, Jason Kidd, Kurt Thomas, Marcus Camby, Chris Copeland and Rasheed Wallace they’ve lost a lot of three point shooting and leadership. But for them to go from being the second seed to missing the playoffs is unfathomable.

The Knicks have had a bad season, but if there’s one thing they’re good at it’s making headlines. The mid-season splash came when they brought Phil Jackson to the Big Apple. Jackson signed a five year deal worth $60 million to become the President of Basketball Operations. According to various ESPN reports, Owner James Dolan has given full power to Jackson to make all basketball decisions. In fact, Dolan, in a rare interview on the Michael Kay Show, was asked what he would do if Jackson decided Carmelo Anthony didn’t factor into his plans for the team and Dolan replied, “It’s his decision. That’s my agreement with him.”
Jackson has a tough road ahead of him due to the salary cap issues of the team and Anthony’s impending free agency. Anthony has expressed his interest to opt out of his current contract at the end of the year. He continues to inform the world that he doesn’t care about the money and if he has to, he will take a pay cut. His only focus is winning a championship. As ESPN sportswriter Brian Windhorst details, Anthony opting out this year and taking less money wouldn’t do the Knicks any justice. They are well over the cap anyway. A better idea would be for him to remain a Knick through next season, then take the pay cut.

The fact of matter is that the Knicks are currently in a world of trouble. When ex-General Manager Donnie Walsh implemented his plans for the team years ago, all his work went down the drain when the Knicks decided to trade for Carmelo Anthony. So far it hasn’t paid off and they haven’t come close to winning a championship.

The notion that Jackson’s arrival automatically translates into grandeur for this Knicks franchise is asinine. Jackson knows there is work to be done and it all begins this offseason, which may start sooner than the Knicks hoped. The Phil Jackson regime has begun in New York. Will he deliver the goods? We shall see. 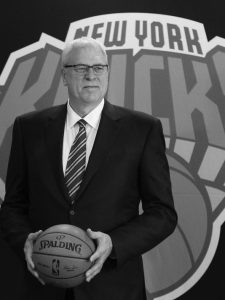