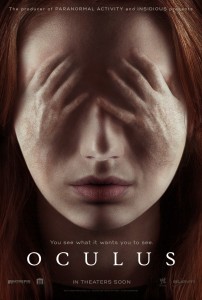 Ever since the releases of films such as “The Conjuring” and “Insidious 2,” horror fans have been treated to movies that have strayed from the path of gore and predictable scares to ones that use atmospheric feelings of dread and suspense to bolster fear in audiences. “Oculus” is the next movie to continue this trend, with satisfying results. “Oculus” tells the story of Kaylie and Tim Russell, two siblings who had their childhood torn away when Tim killed their father in self-defense after the father brutally tortured and murdered their mother.

Fast forward 11 years as Tim is released from a psychiatric ward and is greeted by his sister, who tells him that she believes a mirror in their old house was responsible for the actions of their father. The mirror is known as the Lasser Glass and not only does it drive people mad, it also changes their perception of their surroundings, causing chaos for anyone involved; it is responsible for 45 deaths, beginning in the 1700s. Kaylie reminds Tim of the promise he made the night their parents died that when they got older the two of them were going to find the mirror and destroy it.

“Oculus” is filmed very well as it weaves seamlessly between the flashbacks of the siblings’ childhood and the present day, without being confusing for the audience. In the flashback scenes, viewers are shown the Russell family’s descent into madness, particularly that of their father because the mirror was in his office where he spent most of his time. The present day scenes show Kaylie and Tim returning to their childhood home with the mirror searching for a way to destroy it.

I was a bit skeptical going into “Oculus” and a bit nervous that it wouldn’t deliver on scares, but the film put my skepticism to bed. The film does a good job of building the suspense before delivering a scare, making it that much more frightening.

Another thing that I enjoyed about this movie was that the viewer could really feel as if they were experiencing what the characters were going through, because it becomes a mystery as to what is real and what is another one of the mirror’s tricks. The intensity takes a while to kick in but the plot is strong enough to keep things interesting, and once the scares start, “Oculus” doesn’t let up. Any fan of horror movies should check out “Oculus” for an intriguing and satisfyingly creepy ride.