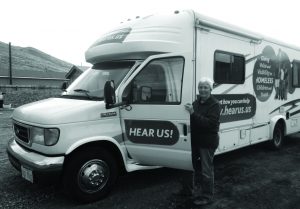 campus on Thursday, April 10 to speak about children and youth homelessness in the United States. The event’s tag line was: “Why it Matters and What We Can Do.” Nilan stood confident and comfortable in front of her audience and asked: “What is the image that comes to mind when I say homeless person—I know what you are thinking.” Someone quickly responded,  “an old man with a beard and a tin can.” Nilan’s rueful, and unsurprised response; “that is the ultra minority that is homeless in this country.”
In 2005 Nilan created HEAR US as a way of giving voice and visibility to homeless children, youth and families. That same year she bought a mobile home and began traveling around the US to advocate for homeless youth, which she continues to do today. In fact she has clocked a whopping 130,000 miles traveling across 48 states since then. Nilan has also partnered with filmmaker Laura Vazquez to produce the documentaries, “My Own Four Walls” and “On the Edge.” She is also the author of “Crossing the Line: Taking Steps to End Homelessness.”
Following the showing of her brief 2006 documentary, “My Own Four Walls,” Nilan led an open discussion pertaining to the film, general questions on her work and her experience with youth homelessness. In the US there are approximately 1.2 million homeless youth, and in New York State there are 109,000 identified homeless students. Yet, including the unaccounted for homeless youth and children, this number would most likely double. Solely based on these astounding numbers, it is clear that this is an enormous and relevant issue, according to Nilan, “youth homelessness is the worst it has been in years.” Yet homelessness is often pushed to the backs of the minds of the general population, often not considered as controversial in the political sphere, not regarded as an urgent or relevant issue. It seems that this is also the case on a national scale. According to Nilan, “Congress tends to think of homelessness in a narrow way, and the funding has been pathetic.” To this many may wonder, “Why?” Nilan explained that the reasons for youth homelessness can be various, and that the lack of consideration of this issue, specifically by Congress may partially be due to an assumption that the homeless are populating and besmirching the imagined sterile streets of the country’s cities and towns. Among other reasons for this lack of attention to such a large scale of the issue is that,  “in this country we don’t take kids seriously—especially little kids.” It became clear, following the showing of her documentary, that the voices of homeless youth, no matter how young, were not only honest, but also valid and even mature.

So, what can we do on a smaller scale? According to Nilan’s website, hearus.us, immediate actions the general public may take are as follows: volunteer at a local shelter or pantry, collect items needed by homeless families or teens (specifically hygiene products, for they are not covered by food stamps), tutor homeless kids at a local shelter or school, arrange a showing of “My Own Four Walls” or “On The Edge” in your community, and meet with your local and state government representatives or member of Congress. Nilan also discussed the possibility and the benefits of colleges and universities inclusion of courses on homelessness, and more specifically youth homelessness in their curriculum. Although these issues may be touched upon in classrooms, the vastness and seriousness of this issue beckons the dedication of a full course.

The most valuable lesson that may have been taken away from Nilan’s talk is that we must attempt to be more aware of youth and child homelessness in our own backyards, and in turn, help others to recognize this as an issue that warrants serious attention. One of Nilan’s last statements was directed at the college community, “we [the United States] will be dealing with an endless waterfall [of homeless youth and children] it is up to the college/university level to educate students on homelessness.”