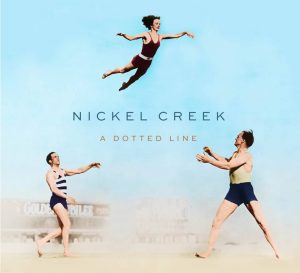 When I first heard the single, “Hayloft,” off of Nickel Creek’s new album, “A Dotted Line,” I nearly had a heart attack. The cover of Canadian indie-rock band Mother Mother’s song was catchy, sure, but was the farthest thing from their previous sound I could have imagined.  Repeatedly, I sighed and gulped with spats of frustration that one of my favorite childhood bands seemed to have completely transformed into something poppy and utterly banal. Cored of their folky pit, I felt duped for thinking that after a nine year hiatus things could have possibly stayed the same. However, as I continued to explore the other tracks on the album, I realized that perhaps this transformation I was sensing may not have been that far of a departure from what I truly loved about the band in the first place. I just wasn’t ready to recognize the group in its new incarnation.

When you are a fan of traditional folk music (like those Nickel Creek tends to attract) you expect a certain structure to a tune. Sweeping fiddle lines, keening voices and steel-string guitars are part of a formulaic expression of the same ideas that folk music has passed down through generations. A band like Nickel Creek, whose majority of early songs were either traditional or based on traditional music, have an automatically prejudiced audience when it comes to ingesting a new album. Their fans value familiarity above all, and there is no harsher critic than a neophobe. But within a few plays of the album, the colors blended, new tunes became acquaintances and I was able to hear the album clearly for what it is: a pretty good folk-pop album, with a couple of scattered gems.

The most notable moment on this record was without a doubt “Love of Mine.” Casually crooning heart-breaking lyrics, front man Chris Thile (of Punch Brothers) discusses the tendency of love to form a trapping-pit; the common trope of falling in love with love, rather than the person. My favorite verse I’ve heard in ages was mined from this song, “I don’t suppose you caught her name/Never mind I’ll just name her after you, love of mine/I’ll fashion her into a sweet long legged icon making all praise holier/Satisfied. It also displayed the better qualities that the members of this band bring out in each other. The harmonies are tight enough to form the ever-sought “wall of sound” and each instrumental part feeds off the previous one, forming a sub-conversation in the background.

So in the end, was this album everything I hope it would be after nine years of feeling hung out to dry? No. But did the gleaming moments that were folded into an otherwise neutral landscape make it worth it? Absolutely. I’ll always pick any album of theirs over empty space.