The Super Bowl celebrations are over and the upcoming season is almost upon us. The first step to next year’s Super Bowl is free agency. This year’s free agent market was full of big names and even bigger contracts. Many of the top teams in the NFL are getting even better.

The team that analysts say are having one of the best offseasons is the Denver Broncos. On the first day of free agency the Broncos made big strides in order to better their defense. They signed cornerback Aqib Talib to replace Dominique Rodgers-Cromartie along with hard-hitting safety TJ Ward. They also brought on defensive end DeMarcus Ware, which will help their pass rush. On offense, they lost wide receiver Eric Decker but replaced him with Emmanuel Sanders.

The New England Patriots re-signed wide receiver Julian Edelman who is a key receiving option for Tom Brady.  But their big signing was cornerback Darrelle Revis. Revis was cut by the Tampa Bay Buccaneers in order to save money on the salary cap. The Patriots needed to fill the hole left by Talib, and Revis could be the difference maker. He is one of the best cornerbacks in recent years who can help the Patriots go back to the Super Bowl.

A team that made a lot of big moves this offseason is the Oakland Raiders. On defense they signed cornerback Tarell Brown, defensive lineman Justin Tuck and linebacker LaMarr Woodley. These players will help improve the Raiders mediocre defense. They also re-signed running back Darren McFadden and signed wide receiver James Jones, adding another dimension to their receiving corps.

The New York Giants secondary is looking better than it has ever been. They signed cornerbacks Rodgers-Cromartie and Walter Thurmund to help solidify their secondary. They  also signed Will Demps which will add another dimension to their special teams. On offense they added running back Rashad Jennings from the Raiders and wide receiver Mario Manningham from the 49ers.

The 2014 NFL draft is filled with wide receiver talent but some teams are signing receivers through the free agent market. Golden Tate is joining Calvin Johnson in Detroit, creating a dynamic duo for Matthew Stafford. Eric Decker is coming to the New York Jets and is expected to be their main offensive threat. Former Giant Hakeem Nicks is a new weapon for the Indianapolis Colts, while Steve Smith promises there will be “Blood and guts everywhere” when his new team, the Ravens, play the Panthers (his old team).

One of the biggest losers this offseason is the Dallas Cowboys. Their big losses were both on the defensive line with  Demarcus Ware and Jason Hatcher leaving. They added Terrell McClain and  Jeremy Mincey to replace them but this is a major downgrade.
This offseason has had some major names switching teams and it will be interesting to see how the rest plays out. 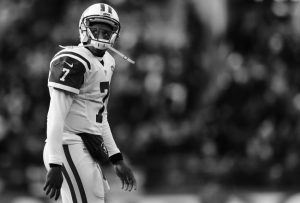