On July 23 New Jersey Devils General Manager Lou Lamoriello signed forward Jaromir Jagr to a one year deal worth two million dollars. This contract was regarded as a low risk, high reward deal for the Devils. But while Jagr is one of the best forwards in National Hockey League (NHL) history, he is 42 years old and coming off a disappointing 2013 season in which he scored a combined 16 goals for the Dallas Stars and Boston Bruins.
After signing with the Devils, most hockey analysts viewed this transaction as an attempt to add experience and leadership, also some secondary scoring. But this season has been a rebound year for Jagr, where he has been New Jersey’s most consistent offensive threat, scoring 59 points (22 goals, 37 assists) through his first 69 games.

The Devils are currently on the outside of the playoff picture, but the major reason they are still relevant is Jagr’s timely ability to score clutch goals. On December 17 the Devils defeated the Ottawa Senators 5-2. Jagr scored the third goal of the game which ended up being the game winner. This was his 118th career game winning goal, passing Hall of Famer “Mr. Hockey” Gordie Howe for the most in NHL history.

But that wasn’t the only milestone that Jagr hit this season. On February 28, the Czech legend scored his 700th career goal against the New York Islanders. He is currently seventh in NHL history in goals (704) and points (1748), while still having time to move up in both categories if he continues his stellar play through the end of the season.

Jagr was the fifth overall pick in the 1990 NHL Entry Draft by the Pittsburgh Penguins, where he was mentored by legendary forward Mario Lemieux. He won two Stanley Cups with the Penguins in 1991 and 1992. During his 11 seasons with Pittsburgh Jagr scored over 30 goals ten times. In 1999, Jagr won his only Hart Trophy as league MVP while scoring 44 goals and 83 assists.
After the 2000-2001 season Jagr left Pittsburgh via free agency and signed with the Washington Capitals. His contract was seven years worth 77 million dollars. He played only two years with the Capitals before getting traded to the New York Rangers. Jagr spent parts of four seasons with the Rangers, setting the team’s single season goal record (54) during the 2005-2006 campaign. This was also the first time the Rangers had made the playoffs since 1997 and Jagr was the main reason for this, finishing second in MVP voting.

When his time with the Rangers was up, Jagr played three seasons with Avangard Omsk in the Russian Kontinental Hockey League. After a short stint in Russia, Jagr  returned to the NHL in the 2011-2012 season with the Philadelphia Flyers, scoring 54 points in 73 games.

The 2013-2014 season has been a renaissance year for Jagr, yet there is still no official decision of whether or not he will be returning for the 2014-2015 season. But in a press conference Jagr’s agent Petr Svoboda said, “I don’t want to jump the gun, but I think there’s a really great chance that [Jagr’s] going to be a New Jersey Devil next year.” This is great news for not just Devils’ fans, but the entire league. 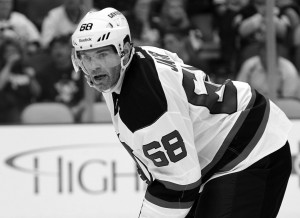