On March 19, to commemorate Women’s History Month, SUNY Oneonta hosted a Poetry Slam with special guest Franny Choi. Choi is a relevant figure in contemporary poetry with many prestigious awards to her name. She has been a finalist in the Women of the World Poetry Slam, Individual World Poetry Slam and National Poetry Slam, was among the top tier of females in the 2011 Southern Fried Poetry Slam and champion of the Seoul Poetry slam in 2010. Her appearance at Oneonta was the first stop on her new book tour, the tour will continue on to cities such as Washington D.C., Chicago and her hometown of Providence, Rhode Island. The book is a compilation of some of Choi’s best works and is now available in stores. 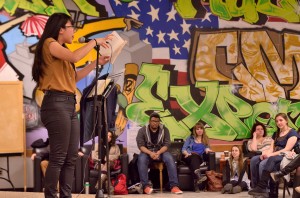 Choi read an array of pieces from her new book along with some poems designated specifically for slamming. Her poems included various topics, many pertaining to the evening’s theme of women. Poems she recited ranged from personal experiences, challenges faced through growth and poems influenced by random encounters on the street. The “speaking back” style of some of Choi’s work was captivating and demonstrated a positive way to deal with and conquer the factors of life that attempt to impede the progression of it. One of the most unique portions of her reading was a poem that delved into the lyrics of a common song by artist Lil’ Wayne. It made a close observation at the frequency of certain words, like “pussy,” used as lyrics within the song that left the audience laughing, yet provoked thought amongst the crowd.
The second part of the night was left open for students to slam. Any member of the crowd was able to participate in expressing themselves via spoken word and even accompanied by music. Members of the slam team provided the crowd with great work as did the others who volunteered to participate in this non-competitive slam event. It was an interesting change of pace for the evening and was an opportunity for Oneonta students to showcase their work to a prominent figure in the poetry world. Students’ work was both impressive and profound and the audience seemed to really enjoy what they heard.
Choi was an excellent guest for SUNY Oneonta and its students. She provided a terrific performance of beautifully crafted poetry that left the audience astonished, chuckling and impressed. Oneonta students also provided a solid addition to the night entertaining the crowd with their incredible pieces as well. This event did not disappoint; it was yet another successful slam. Poetry slam events are open to all who want to share and experience thoughtful works of poetry and appreciate the arts. The next slam event is scheduled for April 16 so come down, maybe read a piece of your own and enjoy the poetry.