It was a happy holiday season for  fans of the Oklahoma City Thunder. Their team used national television to embarrass the New York Knicks in Madison Square Garden on Christmas Day. In blowout fashion that ended 123-94, Kevin Durant led all scorers with 29 points and his teammate Russell Westbrook recorded a triple-double with 14 points, 13 rebounds and 10 assists.
But the Christmas spirit wasn’t long-lasting,  as reports came out after the game that Westbrook would have to undergo another knee surgery. This injury sidelined him in the postseason last year and for a number of games this season.
Durant is the best player on the Thunder, and some may argue the best in the league, averaging 31.8 points per game on nearly 51 percent shooting.

Along with those marks, he has averaged 7.6 rebounds and  5.6 assists per game. Durant may be on his way to capturing his fourth scoring title in five years, along with grabbing his first MVP award.
After Westbrook went down this season, Durant began playing MVP caliber basketball and is quickly becoming an NBA all-time great.

The Thunder rose to the top of the Western Conference because of Durant’s skill. In January he averaged 35.9 points, 6.1 rebounds and 6.1 assists on 54.9 percent shooting. This dominance included a trip to South Beach where the Thunder defeated the Miami Heat.

How is it that Westbrook can take more shots in a game than Durant? Last season, Westbrook averaged one more field goal attempt per game than Durant, while shooting eight percent lower. Too often, Durant has succumbed to Westbrook’s ball hogging and reckless playing. In their devastating loss against the Los Angeles Lakers, Westbrook attempted four shots in the final minute. How many did the best player on the team take? None.

After Durant’s struggles in the 2013 playoffs when Memphis defeated the Thunder in five games, many were saying that Westbrook was missed. ESPN’s Skip Bayless said that he now considered “KD” to be the Robin of the team, while Westbrook became Batman, the driving force.Durant proved that wasn’t the case this year when he had unbelievable months in January and February, which had everyone pushing him to the top of the MVP race.

When Oklahoma City lost James Harden to the Houston Rockets, many speculated this would hurt their future title chances. But it is possible that they can be headed back to the NBA finals. The formula for their success is predicated on Westbrook’s ability to take a step back. He is a great player, and  widely regarded as one of the most athletic point guards in the NBA, but for the Thunder to elevate to the next level he will need to take a page from Miami shooting guard Dwayne Wade’s book.

After Miami lost the 2011 NBA Finals to Dallas, Wade decided that he needed to let Lebron take control of the team and become more of a secondary option. This propelled them, and two years later they are back-to-back champions.
Russell Westbrook is a great player but sometimes he can be  his own worst enemy. We often see Westbrook make costly unforced turnovers and then try to amend his mistake the very next possession by attempting to score. The best player on the team shouldn’t have to stand around and watch Westbrook force up questionable shots.

Oklahoma City can be successful if Durant assumes his role as the leader of the team. With the combination of his all-around talent, Westbrook’s playmaking, improved decision making and timely scoring, Serge Ibaka’s intangibles and defense and the young players like Jeremy Lamb and Reggie Jackson contributing every night, the Thunder can hoist the Larry O’Brien Trophy in June. It is time for Kevin Durant to get angry. 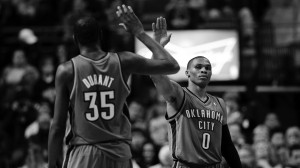