As someone who has been a vegetarian for 12 years, I think if I hear the question, “Why are you a vegetarian?” one more time, I might actually spontaneously combust into a million pieces out of pure frustration. So I have a question for you students of SUNY Oneonta: Why are you not a vegetarian? Let me give you five reasons as to why becoming a vegetarian is a fantastic idea:
1. You will lose weight and you will keep that weight off, if you do it right.
Vegetarians are one third less likely to be or become obese than your ave 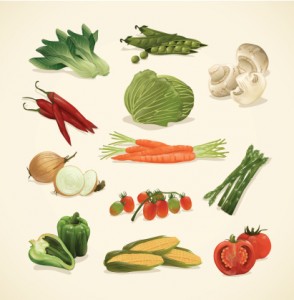 rage meat-eater. That means that by becoming a vegetarian, you are decreasing your chances of becoming obese by almost 66 percent. Also, people who became vegetarians were found to have lost an average of 24 pounds just in the first year. Follow-up studies show, that these people not only lost the weight, but kept it off for five years after. This happens without having to count calories, because the amount of fat you’re eating decreases drastically and you increase your amount of plant-based foods.
2. You’ll live longer!
According to Michael F. Roizen, author of The Real Age Diet: Make Yourself Younger with What You Eat, by becoming a vegetarian you can add 13 healthy years onto your life. He says that the saturated fats found in animal meats clog your arteries and slow down you immune system. This creates more likelihood and further risk of strokes and heart disease. Therefore, simply by cutting meat out of your diet, you drastically decrease your chances of suffering from either of these fatal health issues.

3. Your energy will increase without having to drink more coffee.
As previously stated, too much fat from animal meats can begin to clog your arteries, which depletes your energy. The buildup of fat in your arteries can begin to prevent them from opening properly. When this happens, your muscles aren’t getting enough energy. Becoming a vegetarian can increase your overall energy, creating almost instant positive changes in your life. For example, not having to hit the snooze button, being able to focus better or even engaging in better sex.
4. You will instantly become a part of the efforts in reducing pollution.
According to the U.S. Environmental Protection Agency (EPA), waste from animals and chemical waste from factory farms is responsible for more than 173,000 miles of polluted rivers and streams. This polluted water does, in one way or another, eventually come back to all of us. By stopping your intake of meat, you’re joining the fight against the mass pollution produced by these factory farms. You are also taking arms against the inhumane treatment of animals that goes on within these farms.

70 percent of the antibiotics that humans consume are also fed to livestock. This means that by eating meat, you can gradually make yourself immune to an antibiotic.  Also, according to the EPA, 95 percent of the pesticide residue in a typical American diet comes from meat. So by becoming a vegetarian, you could reduce your pesticide intake to just 5 percent.