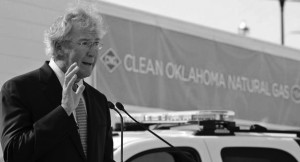 Chesapeake Energy CEO Aubrey McLendon, named Forbes “Most Reckless Billionaire” in 2011, is in the spotlight once again, but this time it isn’t for violating the Clean Air Act or being hit with record fines by the Environmental Protection Agency. While money has always been at the heart of the oil and gas company’s motives, this has been made more evident than ever. The Oklahoma-based oil and gas mammoth risked financial ruin in 2011 but McLendon, who was described by Rolling Stone as having a “reputation for being a tough street-fighter” managed to pick the company up by its bootstraps. The company’s upswing understandably raised eyebrows. Many wondered how McLendon really financed the gargantuan sum it took to bounce back.
Anyone who leased land to Chesapeake Energy could tell you exactly how by showing you their empty pockets.
Chesapeake promised landowners one-eighth of the profit from wells on their land. However, according to ProPublica, Chesapeake “radically reinterpreted the terms of the deal.” Chesapeake decided to sell their gathering lines, the local pipelines that connect backwoods wells to the nation’s pipelines, to a new business in the field, Access Midstream. The catch is that Access Midstream was created by Chesapeake.
By creating Access Midstream, Chesapeake essentially monopolized the entire process. This move created additional expenses for landowners in order to make up the company’s debt. To get cash quickly, Chesapeake sold its gathering lines to Access for $4.8 billion, which was promptly repaid in fees to use Access’ pipelines. In what’s been described as a $5 billion shuffle, Chesapeake and Access essentially played a game of hot potato with $4.8 billion. Access then raised transportation fees seventy-six cents per cubic feet, passing the additional charge on to Chesapeake who passed them on to landowners.
In the end, this scheme made it so a landowner who may have received over $5,000 in royalties one month may have received only $500 the next. Private landowners from all across the states are accusing Chesapeake and similar companies of skimping on royalties. Chesapeake used these “gathering fees” as an excuse to withhold up to 94 percent of royalties for some landowners.
According to ProPublica, Pennsylvania Governor Tom Corbett wrote to McLendon saying the company’s expense billing “defies logic.” Corbett then contacted the Attorney General to look into Chesapeake. McLendon has since been forced to abdicate his throne at the fracking superpower, Chesapeake.
Perhaps Chesapeake’s meltdown will serve as a warning to other oil and gas companies carrying out similar strategies, but more importantly, this could serve as a warning to those who believe that oil and gas companies offer anything other than pollution and poverty.