Kevin Durant is tired of being number two. He’s sick of coming up short in the playoffs, being shunned in the MVP and most of all he’s sick of being considered second to Lebron James. It is finally Durant’s time to shine, to step out of Lebron’s shadow and get himself an MVP award and an NBA title and he sure is showing it.
Durant’s  Oklahoma City Thunder currently has the second best record in the NBA, tied with the Indiana Pacers and only half a game behind the perennial title contenders, the San Antonio Spurs. What’s even more impressive is that Oklahoma City has been without point guard Russell Westbrook for most of the season.

This is a direct result of Durant playing the best basketball of his career, averaging nearly 32 points with over five assists and seven rebounds a game this season. Not out of the ordinary for a player of Durant’s ability but these stats are punctuated by an incredible January. Durant seemingly had the MVP wrapped up after 12 straight games scoring over 30 points, highlighted by a career high of 54 points against the Golden State Warriors.

Most analysts were about to hand the award to Durant but they should know by now to never count out Lebron. James responded with a streak of his own, stretching from late February to early March, which included a career high of 61 points against the lowly Charlotte Bobcats.

However, James has suffered a bit of a slide lately. The Heat lost their next three games after Lebron’s 61 point performance and he’s gone without a free throw attempt in a two game stretch, which is rare for such a powerful player.
While it’s too early to declare an MVP the odds are  in Durant’s favor. His surge combined with possible voter fatigue could mean this is finally Durant’s year, much like Derrick Rose in 2011. 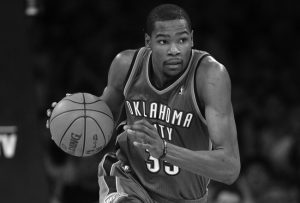