It’s been 335 days since the Wichita State men’s basketball team lost a game. They finished this past season 34-0 and qualified for the big dance, and on Selection Sunday, they were given one of the four coveted top seeds. But the question remains; do they deserve a number one seed in the tournament?
The Shockers have had a remarkable season following a miracle 2013 run. The 2013 Shockers came into the tournament as a  number nine seed in the West Region. They would have a long road ahead of them, but they won their first game easily against Pittsburgh 73-55.

This put them against Gonzaga in the second round. Many believed the Bulldogs were destined to be the team that would cut down the nets in the championship game, but the Shockers were not going to let that happen. They defeated the Zags 76-70 and stunned the country.

They went on to beat 13th seed La Salle in the Sweet Sixteen, advancing to the Elite Eight where they were set to play the number two team in their region, the Ohio State Buckeyes. Wichita State pulled off another upset, advancing to the  Final Four. But in the semi-finals they were set to play the Louisville Cardinals. Louisville ended Wichita’s magical run despite Shockers superstar Cleanthony Early scoring a game high 24 points.

Wichita State came into the 2013-2014 season with high expectations. They only lost four players from the previous squad; three seniors graduated and one transfered. This season’s schedule was set and they were ready to make another run. The Shockers won their first game against Emporia State by 43 points and that’s how the rest of the season went, one win after another. The closest game during the regular season was against Missouri State, which ended up going into overtime, but once again, the Shockers came out on top.

Did the Wichita State Shockers have an easy schedule? Yes. Did they win every game this season? Yes. Do they deserve a number one seed in the tournament? Yes. Wichita State has a chance to make a run in the tournament like they did last year, but the amazing thing about March Madness is that anything can happen. 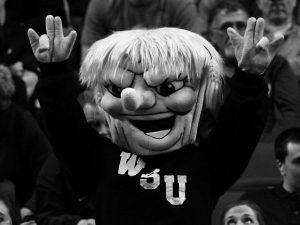