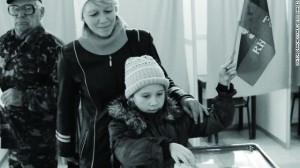 On February 22, the people of Ukraine awoke to the news that their president had gone missing. Within hours, thousands of people filled the streets of Kiev, Ukraine’s capital, waving flags and celebrating the good news. This news hit the press months after protesters had begun calling for the resignation of former president, Viktor Yanukovych. Protests and clashes with riot police, which had filled the streets since November, culminated on that February morning when Yanukovych fled the country. However, the celebrations would be short lived. Five days later, on February 27, the people of Ukraine awoke to news that the Russian military had invaded Crimea, Ukraine’s southernmost province. Russian soldiers continue to occupy Crimea and the international community has been divided along the Cold War lines of east versus west. The situation continues to escalate, after last weekend’s controversial and rushed Ukrainian vote over secession, which the US and UK have denounced as illegitimate. With so much at stake, it is necessary to understand why the people of Ukraine overthrew their democratically elected president, and why Russia has responded in such a drastic manner.
When the protests began in November, no one anticipated the collapse of Ukraine’s government, let alone a Russian invasion. The people of Kiev first started their protest after President Yanukovych suddenly backed out of a trade deal with the European Union. This angered many Ukrainians since they desired closer ties with the rest of Europe. However, Yanukovych’s move meant that Ukraine would continue to work with its historical backer, Russia. The people of Ukraine desired independence from Russia and so they protested the continuation of the status quo.
Over the next few months, the protests continued unabated. Riot police continually fought the protesters, who responded by occupying government buildings. As the situation escalated, the demands of the protest movement changed. While at first they called for a reversal in the Yanukovych decision, the continued violence prompted calls for his resignation. The standoff in Kiev continued until February, when President Yanukovych finally fled the country. A new government was formed, and the people got their wish when the interim president announced closer ties with Europe.
On February 27, armed men speaking Russian seized control of the Crimean Peninsula. Although they wore no means of identification and refused to comment on who they were, it was apparent that the Russian military was making its move. Under the leadership of Vladimir Putin, Russia had decided to take this opportunity to defend its interests in Ukraine. Russia claimed that radicals had wrongfully overthrown the rightful leader of Ukraine, and that Russia would protect the people of Crimea.
On Sunday March 16, the new Crimean government held a vote in order to decide if their province would join Russia. Despite the opposition’s statement that they would boycott the vote, the head of the referendum commission told Reuters that the vote had a surprisingly high turnout of eighty-three percent. Results show that over ninety percent of Crimean voters support joining Russia–another surprisingly high number. Many Western nations, who pleaded with Moscow to abandon the referendum, have expressed suspicions that the vote is a misrepresentation of the people’s will, a sham and a distortion of democracy. Huffington Post calls the referendum a “mockery of democracy,” citing that the vote was held at “ten day’s notice, without a proper campaign or public debate…and in the presence of many thousands of troops from a foreign country.”
If Crimea does indeed join Russia then the former Cold War rivals will experience a renewal of political hostility. President Obama has publicly stated that economic action and political isolation will befall Russia if it continues down this path. Despite threats, Russia had refused to back down. With the future of Ukraine and Europe’s stability now at risk, the world will be watching the events unfold following the Crimean vote.