One year after the tragic events of the 2013 Boston Marathon, the city is ready to try to go back to some sort of normalcy. As the 2014 race approaches, there are going to be some new rules enforced to help protect the safety of both the runners and spectators. The most prominent rule change is that bags and suitcases will not be allowed near the race. Another change made is that containers that hold more than one liter of liquid will be banned.

As the years have passed there have been more and more changes created in sports arenas and stadiums that attempt to improve the safety of both the athletes and the fans. Some of the changes are positive. For example, fans were once allowed to smoke tobacco inside arenas during sporting events. Some of the retired New York Islanders jerseys in the rafters at the Nassau Veterans Memorial Coliseum have yellow stains on them from the rampant smoking. In addition, all sporting venues take the cap off of beer bottles in fear of a fan throwing the cap on the ice or field which may lead to an injury.

But the overall banning of bags at marathon events is an extreme step taken for public safety. In most stadiums or arenas, you are allowed to bring in a bag to hold your belongings. But before you walk in, you seem to go through an endless amount of security just to sit down and watch something that you are supposed to enjoy.

There is no denying that there are bad people in the world who want to go out of their way in order to create havoc. Some of the changes made will protect all parties involved. Metal detectors play a key part in ensuring the safety of the fans. Just seeing the metal detectors creates a reassuring feeling for viewers. If a person entering an arena is attempting to bring in a knife, gun or another weapon, they will easily be stopped and more than likely arrested. Also, stadiums are filled with security guards and cops who are capable of dealing with unruly patrons.

A major issue that divides fans is whether or not arenas should be able to go through a fan’s bag. If a metal detector scans the bag, it is more than likely that anything improper would be found. The overall bag search is an invasive process. Security guards have full authority to shine a flashlight in the fan’s bag and move objects around to see what is in there.

This is a personal issue for me, being a diabetic. Having to carry needles and lancets into an arena causes nothing but trouble. I have never gone to a sporting event without the guard asking me why I have needles (like I am going to try and bring illegal drugs into the “World’s Most Famous Arena”).

So if I wanted to watch the Boston Marathon, I would need to keep all of my testing supplies in my pockets, making it a struggle to take out if need be. There is no doubt that people at sporting events should be protected, but at what cost? 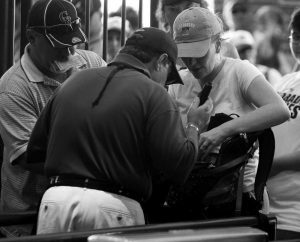