Right now, you probably have a smart phone in your back pocket (or within a 10 foot radius), a laptop nearby and an iPod in your workout bag. We tend to keep our beloved technology close at hand these days. However, some companies believe that we can and should have an even closer relationship with our tech toys. Products like Google Glass, Sony SmartWig, various smart watches and the strange bra designed by Microsoft prove that technology can grow on us.
Google Glass first came into the spotlight about two years ago and was met with mixed emotions. The product is built to record what the wearer is seeing, share whatever they record on various social media sites, give the wearer directions, send the wearer’s messages, etc. Glass can hook directly onto your prescription glasses or they can be worn on their own. It’s basically the Internet available in fashion accessory form.
Sony’s SmartWig, though still in the design phase, has a structure even more extreme or “close knit” than Google Glass. It is an actual computer with some very futuristic capabilities that is to be worn in place of the user’s hair. Some of the Wig’s capabilities include an EEG monitor, laser pointer, GPS and even navigating software to help blind wearers. As far out as this idea seems, it’s coming along a lot sooner than you’d think.
Then there are the compact companions of the quintessential smart phone: the smart watch. These accompaniments serve basically identical functions as their predecessors, with one important difference: they can be worn on the wrist and disguised as a simple watch (cue any spy movie you’ve ever seen).
The wearer is more connected to the outside world than ever, with the smart watch ringing when a call is coming in or alerting the wearer when she/he has received a text. There are also a few apps (some fitness related, some more centered on social media) that can be downloaded and used on the product.
Last but certainly not strangest, would be the bra designed by Microsoft. The product was created to help stop women from stress eating by alerting them when they were stressed. It seems like a simple function, a redundant one, really. The bra has an EKG monitor sewn into the material and allows the bra to sense when the wearer’s heart rate changes. The wearer is then alerted to the change through a smart phone app that warns them to not overeat.
Maybe these products seem farfetched, but they’re actually closer to becoming the norm. Each year, technology companies design more and more of what has been deemed as “wearable technology.” Our generation enjoys keeping its technological toys by its side, but how close is too close? The field of invasive fashions, or wearable technology, will no doubt soon find out. 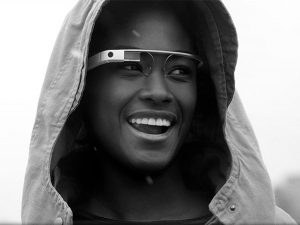