Within the past ten years, privacy has gone completely to the wayside with the use of fake IDs.
However, according to some SUNY Oneonta students, privacy really wasn’t a concern for them when it came to obtaining and using fake IDs. The general consensus was that they all just wanted to have to get into bars with their friends. The 21+ social scene is now more accessible than ever. And even though college students may only be using these fake IDs to get alcohol, the danger of identity theft is real and present.
Fake IDs are not only used to purchase alcohol. According to the website Identity Hawk, it wouldn’t be too difficult for someone to replicate a fake ID in order to obtain a passport and buy a plane ticket, all with the intention to travel somewhere under someone else’s identity. Furthermore, the replication of a fake ID could also be used for check fraud, bank fraud, social security fraud, immigration fraud and credit fraud.
As college students, things like checks, banks and social security may be the furthest things from our minds. Yet as we enter adulthood, thinking about these things becomes something we have to do in order to become responsible. By purchasing and using a fake ID, college students are putting themselves at risk for identity theft and are essentially giving up their privacy.
According to Robert Siciliano, a blogger for Next Advisor,  “The problem [here] is that the speed of technology has far out paced the security of our identifying documents. Anyone with a computer, scanner, printer [and] laminator… can create breeder documents in order to acquire real IDs. This makes it very difficult to prevent identity theft when anyone can impersonate you at any time. What contributes to the problem is there are thousands of variations of birth certificates, dozens of Social Security cards and a couple hundred different driver’s licenses in circulation. There is very little security and no significant standards to prevent counterfeiting. I’m sure plenty will argue this point with me. However, the fact remains that fake IDs are everywhere.”
What might be more in line with the thoughts of a college student considering purchasing a fake ID is the risk of getting into legal trouble. Most states consider the use of a fake ID a misdemeanor, but others consider it a felony. And while at 18 years old you might not be of age to legally drink alcohol, you are of legal age to be tried in court as an adult. The penalties of some states are more severe than others; possible punishments can include heavy fines, the suspension of a driver’s license, and in some cases, jail time.
With the drinking age in the United States at 21, college students will continue to obtain fake IDs in order to go to bars with their friends and purchase alcohol from liquor stores. Perphaps the prospect of idenity theft will continue to stay at the back of college students minds until they face the real consequences, or maybe until they turn 21 themselves. 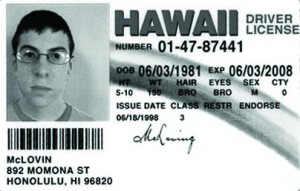