Anthony Beers, Staff Writer
Fans have an absurdly deep appreciation for professional athletes. It starts at a young age and carries well into their later years. This strong loyalty to teams and players is what has caused the media surrounding sports to be at the  intense level that it is today. What’s even more remarkable is a fan’s ability to turn against a once loved player.
In 1986, Boston Red Sox fans put first basemen Bill Buckner in the doghouse after his crucial error in Game 6 of the World Series that resulted in a Red Sox loss. Buckner’s error caused Mets base runner Ray Knight to score from second and extend the World Series to a decisive Game 7 that the Mets would eventually win. What fans forget is that it took three runs in the bottom of the tenth for the Mets to win Game 6. The Red Sox gave up three straight base hits, a wild pitch and an error to lose that game. After his retirement, Buckner had to move his family to Idaho in order to escape death threats and an insane media that magnified his nightmarish error.

This is where sports fans can be selfish and where a lack of privacy for an individual can be a serious issue. Buckner is not alone. Fans use scapegoats in sports as a coping mechanism. In “ESPN’s 30 for 30: Catching Hell”, Producer Alex Gibney retells the story of how the city of Chicago turned on loyal Cubs fan Steve Bartman. In Game 6 of the 2003 NLCS, Bartman reached for a foul ball in the crowd that very well could have been caught by Cubs outfielder Moises Alou. Following the controversial blunder, the Cubs gave up an eight-run rally against the Florida Marlins and lost the game. Gibney uses his documentary to powerfully exemplify just how cruel sports media and fans can be towards an individual. “Catching Hell” pointed out that several fans reached for the foul ball, but the media’s constant showing of Bartman caused the entire city to blame him. His home address was even released in the local newspapers. Bartman was forced to move and go into hiding to avoid all the commotion and threats.

Buckner and Bartman both suffered from an unfair lack of privacy, and they’re just two examples of tons of victimized scapegoats in professional sports. The hostility that individuals like Buckner and Bartman suffer from and the life-long permanent damage that follows is a far bigger issue on the topic of privacy issues in American sports. Fans need to recognize the immaturity in their coping mechanisms when they’re looking for an excuse after a heartbreaking loss. Even though there may be one play or moment that jumps out at fans, one game has never been lost by one play or blunder.

Succeeding and failing in sports is a team effort. Scapegoats are hypocritical in nature to the purity of team competition. Be better than that. The players deserve better than harassment and a lack of privacy. Be the fan that athletes deserve. 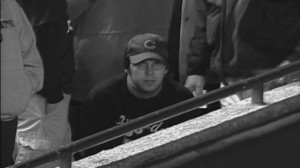