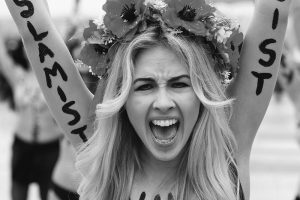 FEMEN, a radical feminist group that has gained strength all across Europe has recently attracted media attention in the United States. Founded in Ukraine in 2008, the “sextremeist” protestors began fighting sex tourism and prostitution after seeing how many Ukrainian girls were being tricked into the trade. Six years later, the group has 250 activists in nine countries and plans to add the US to that list.
FEMEN is now based in Paris after front woman Inna Shevchenko was granted political asylum there. Shevchenko used a chainsaw during a protest against the imprisonment of Russian-based feminist group Pussy Riot to cut down a 13 foot tall cross, whilst topless in Kiev, Ukraine. If that doesn’t say “Down with the Patriarchy,” what does?
FEMEN is known, and often criticized, for using the female body as a tool for protest. Their first topless demonstration was on February 7, 2010, the day Yanukovych was elected president of Ukraine. Women occupied a polling station, their speeches foreshadowing the war Ukraine is currently involved in.
Former culture editor of the State Times and student here at SUNY Oneonta, Laura Arias, conducted an interview with a member of FEMEN in October of 2012. When asked what the group was fighting for, she replied, “In general we are acting against patriarchy and all of its manifestations: sexual exploitation, dictatorship and religion.”
Later in the interview, Arias asked why FEMEN thought using their naked bodies was the answer, to which the FEMEN representative replied, “It is the firstly in women’s history we are taking back our bodies, our sexuality from the men’s hands and trying to control it by ourselves. Why men decide what we have to do with our bodies: to hide and to use only for men’s satisfaction or to promote some products for sale with our nakedness to make benefit for men’s corporations?” The group sees hiding the female body as not taking ownership of it.
Organized religion poses a huge threat to women’s rights according to FEMEN. In an interview with the Daily Beast, Shevchenko stated, “Religion is not a personal issue anymore, it has become political. It doesn’t exist only to provide moral support anymore but to replace constitutions and supplant human rights with religious traditions.” During an anti-abortion walk in Berlin in 2013, FEMEN women protested amongst hundreds in a parade carrying large wooden crosses.
Often mocked by other feminist agendas due to their murky beginnings, the group was originally led by a man­­—Viktor Sviatsky. This paired with their particular brand of bare-breasted protest makes many view them as missing the point entirely. Feminist media, such as Feminist Current, discredits all protesting done by the group due to their founder and tactics. Some see the nude protests as objectification and claim no redeeming quality in their actions. In an interview with London based publication The Independent, Shevchenko acknowledged the leadership role Viktor Sviatsky took during the initial stages of FEMEN’s history. She spoke on how he had the experience none of the women involved had yet but states he is no longer involved with the group despite numerous attempts to rejoin the movement.
The group’s radical demonstrations have some people extremely turned off. About a month ago, outside the Ukrainian embassy in Paris, some FEMEN demonstrators dropped their trousers and urinated on pictures of the Ukrainian president. This sort of behavior has many Americans apprehensive about their plans to develop an organization in the US. When interviewed for the Daily Beast, Shevchenko explained why the US was the next destination for FEMEN: “We appear in countries when called upon by women to come there.” Regardless of our opinions on their protest tactics, there is no argument that FEMEN has the world’s attention