Alex Hoysradt, Staff Writer
Major League Baseball has passed a new experimental rule that will come into effect in 2014 banning home-plate collisions. This rule was put in place so teams have all of Spring Training to adjust to the changes. Over the past few years, home-plate collisions have become a topic of controversy that came into the public eye in 2011 when San Francisco Giants catcher Buster Posey broke his leg in a brutal collision. Since then, there have been a handful of injuries and concussions to catchers and base runners. The MLB has discussed cracking down on collisions and have decided now is the time to take action. Here are the key parts of the new rule:

•A runner may not run out of a direct line to the plate to initiate contact with the catcher. If so he can be called out.

•A catcher cannot block the plate unless he is already in possession of the ball. If he does so before he has the ball, the runner can be called safe.

All calls with this new rule are based on the umpire’s judgment. If the hit is blatant, the player can be ejected. A manager can use his challenge on plays at the plate. As expected, this rule has brought both praise and objection. Blue Jays Manager John Gibbons, a former catcher, said “In a lot of ways I don’t really think its going to be that big a difference. I think if you start trying to play with the game too much, you’re going to run into problems.” Astros catcher Jason Castro agrees with the rule, “I think these are positive changes. I don’t think they’ll change the game, just some safety stuff to keep guys on the field longer.”

The argument against the rule is that home-plate collisions are a part of baseball, they add excitement and can decide the outcome of a game. Players will do anything to stop a runner from scoring. If the catcher is in the runners way, they have no choice but to run through the catcher. While this rule does help provide safety for the players in those situations, it does have some gray areas that could be problematic to call in a bang-bang play. Also, every umpire will have their own limits on what a player can and can not do, which will result in inconsistent calls that may cause controversy.
In the long run, this rule may turn out to be very beneficial to baseball and become a permanent implementation or it could turn out to be too problematic and force the MLB to retract the rule. The fact that it is experimental plays in its favor; if it works the MLB can keep it, if not scrap it. Either way, it can’t hurt to try this rule. 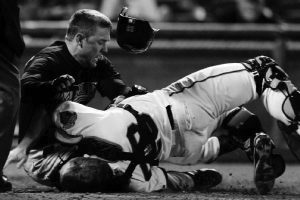