On February 12, longtime New York Yankee shortstop and Captain Derek Jeter announced that 2014 would be his final season. This is not a surprise to many fans and analysts, considering that Jeter is about to turn 40 and missed the majority of the 2013 season due to ankle and calf injuries. In the 17 games that he did participate in, Jeter batted a lowly .190 with one home run and seven RBIs. While he did struggle last season, Jeter’s career will be mostly remembered for clutch moments and World Series victories.
Jeter was picked sixth overall by the Yankees in the 1995 MLB draft. One year later, the 22 year old won the Rookie of the Year award with a .314 batting average with 10 homers and 78 RBI’s. Then in 1996, he led the Yankees to a World Series title, the team’s first since 1978. Throughout his first 19 years in the big leagues, Jeter and the Yankees won five World Series titles with an unforgettable three-peat stretch from 1998-2000. His last championship came in 2009, in their first year at the new Yankee Stadium.

During his career, Jeter has produced Hall of Fame numbers. Along with his Rookie of the Year award, he has also won five Gold Gloves, four Silver Slugger awards,  has a career .312 batting average and is a thirteen time All-Star.
While these numbers are great, what really puts Jeter into the legendary category is his flair for the dramatics. Whenever there was a big moment for the Yankees, it is very likely that Jeter was a part of it. Whether it was Jeter’s home run in Game 1 of the ALCS against the Orioles (with a little help from 12 year old fan Jeffrey Maier), his famous “flip play” against the Oakland Athletics in Game 3 of the 2001 ALDS or the catch he made on July 1, 2004 against the Red Sox, where he dove head first into the stands, Jeter just seemed to have that “clutch factor.”

There is a contest going on Twitter in which someone tweets a player’s name with the hashtag #FaceofMLB and the player gets a vote. The player with the most votes at the end of the contest gets named “The Face of the MLB.” New York Mets third baseman David Wright was declared the winner, defeating Oakland Athletics infielder Eric Sogard in the finals. This vote doesn’t matter— Derek Jeter is the face of baseball. He has been since the end of the 1990s and continued to be one of the most respected players in the game during the 2000s, when superstars like Barry Bonds and Roger Clemens were accused of performance enhancing drugs. In one of the darkest eras of baseball, Jeter was one of the stars shining the brightest.

Jeter was definitely one of the most noticeable people on the field, but he tried to be invisible off of it. Even while dating Jessica Biel, Scarlett Johansson, Minka Kelly or another movie star/model (seriously, Google Derek Jeter Dating Diamond), you never heard him get into any sort of trouble. Being one of the most popular men in one of the world’s biggest cities didn’t faze him. But if you look at how he played the game, maybe he couldn’t be fazed.

This will be Jeter’s swan song and every stadium he goes to for the last time will give him a standing ovation. ESPN will constantly cover his road trips, giving updates about what presents the opposing organization gave him. Some fans from opposing teams will get sick of it quickly, but Derek Jeter has worked hard enough for this goodbye.

Then in five years, Jeter will be inducted into the National Baseball Hall of Fame, where is legacy will live on with likes of Ruth, Gehrig, Aaron and Robinson. For the rest of time Yankees fans will remember his work. 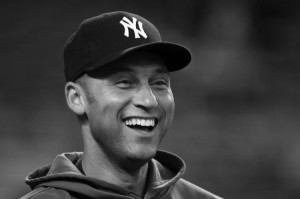