The USA men’s hockey team was set to make a gold medal run in the 2014 Winter Olympics in Sochi.  However, the star-studded roster led by Captain Zach Parise of the Minnesota Wild failed to medal. Team USA was expected to win their pool, which they did with ease. The first game in the preliminaries was against Slovakia. The first period was very close with only one goal for team USA. The second period was where the rest of the scoring happened. There were seven goals scored in the second period: six of them were scored by USA while Slovakia was only able to put one in the back of the net. The United States let off the throttle but defense dominated the third period. Jonathan Quick played well with 22 saves. Paul Statsny had two goals and James Van Riemsdyk was the points leader with three assists.

The only hiccup they had in the preliminary round was against the Russians. Russia is full of NHL stars headed by Captain Alexander Ovechkin. This game was a hard fought battle that couldn’t be settled in regulation or the five minute sudden death overtime period. A shootout was needed to decide the game.

The shootout is different in international hockey. You choose your first three shooters and the order they are in. If the game isn’t decided after the first three rounds, the team can put anyone they want to shoot as many times as needed. T.J. Oshie took the first shot for the  US and scored. The next four shots were either missed or saved by the goalie. It came down to the last shot in the third round where Ilya Kovalchuk netted the tying goal.  In the extra rounds, the US chose Oshie to take all the shots. He scored three out of  five shots including the game winner. In the last game of the preliminary round, they beat Slovenia 5-1. Phil Kessel scored a natural hat trick.

The good play in the preliminariess put the States in second place in the playoff style bracket. Sweden was the first seed and Canada was third. This set up for a USA-Canada rematch in the semi-final round. The only thing in the way was the Czech Republic. The USA eased through that game 5-1. This set the US to have a rematch with their rivals up north.

Team USA went in  expecting to go to the finals. The final score of the game was 1-0 in favor of Canada, but the score does not show how the game was. The Americans were mugged by the Canadian defense the entire night. They could get nothing going on offense and they couldn’t capitalize on the few chances they had. This game ended the gold run and was their first loss. The next day was the bronze medal game against Finland. Team USA came in still disappointed from the loss the previous night. This game was embarrassing for the Americans. Patrick Kane missed two penalty shots and could get nothing going on offense. The defense didn’t do well either, giving up five goals. This was not the same USA fans saw throughout the early rounds of the Olympics.

The USA’s men’s hockey team had a good run in the Olympics in Sochi. They swept the field in the first round but were halted in the semi-finals and came home with no medal at all. 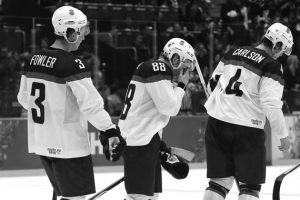