Let’s face it: many of us have been unhappy with our weight at some time or another. From those annual holiday pounds to the resulting bulge from finals-week comfort food, we often find reason to develop self-degrading perceptions of our bodies. But we often overlook the scary fact that for a startlingly high number of people, weight-related insecurity goes far deeper than a disapproving glance in the mirror or a frustrated jean-shopping session. According to the National Eating Disorders Association (NEDA), thirty million people in the United States alone will experience the tribulations of an eating disorder at some time in their lives. Most people probably don’t 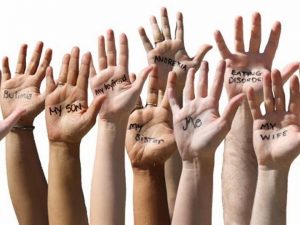 know that statistic —or much else about the severity of these
illnesses, for that matter. That’s why February (with special concentration on the week of the 23 to March 1) has been officially recognized as National Eating Disorder Awareness Month. With the multitude of events and information provided by NEDA and other support organizations during this time, everyone (whether personally struggling with a disorder or not) has the opportunity to get educated and confront these illnesses — just as one would be active in the fight against cancer or other diseases.
NEDA is committed to discrediting common eating-disorder myths and replacing them with the facts, as implied by this year’s awareness theme of “I Had No Idea.” The organization’s online quiz (which anyone can take for free to elicit a donation to NEDA from Eating Disorder Center of Denver) reveals shocking truths — like the fact that there are more people in the U.S. with eating disorders than there are with green eyes. The quiz also debunks the belief that these illnesses aren’t physically dangerous; in fact, they claim more fatalities than any other psychiatric disorder through heart attack, malnutrition and suicide. It is also stressed that anorexia and bulimia aren’t the only prominent eating disorders; there are more people with binge eating disorders (which is often misconceived to be mere overeating) than people with the former two illnesses combined. By presenting truths like these, NEDA makes it easier to become knowledgeable about eating disorders and lays a foundation for making a difference.
So, how exactly can one actually make such a change? From doing something as simple as wearing an awareness badge to going an extra step and hosting a local event, NEDA welcomes and guides anyone interested in volunteering or participating. The organization generates a plethora of events —community
meetings, speaker sessions, art exhibits, movie screenings and more – that relay truths like the ones mentioned earlier. These events are also major sources of encouragement for individuals with eating disorders; they can learn about treatment options, connect with fellow fighters, and feel an outpouring of support from others who are concerned. Anything that one can do to promote NEDA contributes to the ultimate goal: raising awareness of eating disorders not just in February, but 365 days a year.