Major League Baseball began in 1869, the NFL in 1920, the NHL in 1924, and the NBA in 1946. Since the beginning of each of America’s four major sports leagues, there has never been one openly gay active athlete. Then came Jason Collins and Michael Sam.
Think about that for a second. Baseball began four years after the Civil War ended. The NFL and NHL began during the Great Depression. The NBA started a year after the conclusion of World War II. In that time, thousands of men have had the opportunity to play professional sports. Plenty of them were gay, but not one of them said a word while they were playing. The culture of homophobia in sports has clearly been a problem for much longer than people many realize.
Let’s rephrase that: The culture of homophobia in sports has clearly been a problem for men much longer than people realize. Not to generalize, but homophobia is more of an issue in professional sports for men. Brittany Griner (Phoenix Mercury), Megan Rapinoe (USA National Soccer and Olympique Lyonnais French Club), Sheryl Swoopes (USA Basketball, former WNBA star, current coach for Loyola University), Natasha Kai (USA National Soccer and Sky Blue FC) and Billie Jean-King (arguably the best female tennis player of all time) are major examples of popular female athletes that are open about their homosexuality. Women have been able to be openly active professional athletes in America for quite some time now. Billie Jean-King revealed her bi-sexuality in 1981.
Of the 2,500 athletes that recently competed in the Sochi Olympics, there were seven athletes who were open about their homosexuality. It should be noted that none of the openly gay Olympic athletes were American, and none of them were men. This country has a serious problem with homophobia in sports, particularly with men. And that all starts with the jock culture. This macho element creates a culture of homophobia that begins in early levels of organized sports. It doesn’t feel good to be towards the bottom of a sports hierarchy. A lack of professional athletes coming out has nothing to do with showers, or with touching each other, or with awkward sexual tension. It has to do with doing whatever you can to feel like you belong. Being openly gay challenges the camaraderie that players try so desperately to be a part of in sports.
Homophobia  has culturally damaged the game in a way that’s embarrassing to American society. Individuals have been hiding who they truly are for nearly a century because of some made up idea of what manliness really is. Of 51 random NFL players that took a survey on homophobia, 32 of them said they heard coaches or players use homophobic slurs last season. The results are a direct reflection of the culture. What player doesn’t want to impress their coach? If the coach comes across as homophobic, less players will come out.
Michael Sam and Jason Collins are an incredible step in the right direction for American sports. On February 23 Jason Collins played in a game between the Brooklyn Nets and Los Angeles Lakers, making him the first openly gay athlete to partake in a sporting event in the history of America’s four most popular sports. Michael Sam recently participated in the NFL Combine and is expected to be an early draft pick after leading the South Eastern Conference in sacks at the University of Missouri.
If you think coverage of Sam and Collins is being over played and that them being gay is not a big deal, just look at the facts. Look at how long it’s been before anybody came out as an active player. Look at the survey NFL players took about homophobia. Look at what happened during the Olympic Games in Sochi. Look at those things and realize this is a big deal. This is a proud moment for Americans and sports fans alike and a positive step in the right direction for the acceptance of all people. 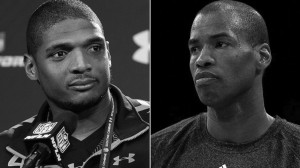