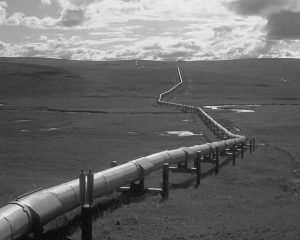 The Keystone Pipeline has been carrying crude oil from Canada to states in the Midwest since 2010. The first three phases of the Keystone project are complete, and now heated discussions over the future of phase four are underway. If completed, the pipeline will consist of a network running from Alberta, Canada to the US Gulf Coast, carrying close to 830,000 barrels of crude oil each day.

The project has created concern among citizens and environmentalists, who worry that the potential for environmental damage outweighs the benefits of a North American pipeline. Deforestation and toxic runoff associated with pipeline’s construction have also been the cause of concern for citizens in the Midwest. These citizens are worried that toxic runoff and oil spills could have detrimental effects on both drinking water and farm land.

Climate change is the biggest concern related to the project, as the oil extracted from Canadian oil sands releases 17 percent more carbon dioxide than the usual barrel of oil refined in the United States. The president has said he will not approve the pipeline if it would contribute to climate change.

The project would bring jobs closer to home for Americans and would reduce our dependency on oil from the Middle East. Economists have stated that the completed pipeline would create 20,000 manufacturing and construction jobs and, according to Patterson Pump Company (which manufactures equipment for this project), an additional 118,000 spin-off jobs.

The opposition to this project says that the jobs that are created will not be long lasting. Environmentalists say that construction jobs will disappear once the 1,179 miles of pipeline have been constructed and the jobs offered on the oil fields will go mostly to Canadian citizens.

Those who oppose the project also say that the pipeline could have worse effects on the economy than anticipated—once Canadian oil companies are able to sell to a broader audience, competition will drive up the cost of heavy crude oil in the Midwest by almost $2 to $4 billion annually. This could have consumers paying 10 to 20 cents more per gallon of gasoline or diesel, which would have immediate effects on families in the Midwest.

Although a poll conducted in November and December of 2013 showed 56 percent of Americans to be in favor of continuing the pipeline, the decision is largely in the hands of our president.