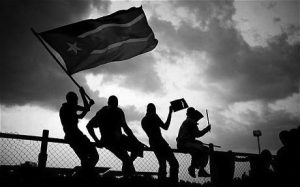 When South Sudan became a new country in 2011, half a century of warfare had left its mark on its inhabitants. The violence which killed over two million people since 1955 finally ended in 2005 when the north and south signed a peace treaty. As part of the deal, it was agreed that the people living in the south would be able to vote on whether or not to become a new country. When the vote finally took place in 2010, it was overwhelmingly decided that South Sudan would be independent. Since that vote, however, the people of South Sudan have been unable to agree on almost anything else.

The country has one of the highest infant and maternal mortality rates in the world, less than half of the people can read and over half of the country survives on subsistence farming. To make matters worse, the new country has also been stricken by more violence. In 2012, Sudan and South Sudan were thrust to the brink of war over the exact location of their borders which sit over a large supply of oil. Moving the border in either direction would mean billions of dollars for whichever country received the land. That standoff was solved by another peace treaty, but violence over the border is not the main threat to the people of the south.

South Sudan is an ethnically diverse nation, with the Dinka and Nuer people representing the two largest ethnic groups in the country. In order to ensure equal representation in the government for the two groups, the President, Salva Kiir, is a Dinka and the Prime Minister was a Nuer. However, a power struggle erupted between the president and prime minister, forcing the prime minister out of office. Accusations that the prime minister attempted to overthrow the government prompted the two side’s supporters to clash in the capitol city. Since the two men come from different ethnic groups, the violence quickly spread throughout the country along these ethnic lines. In just a few short weeks, ten thousand South Sudanese lay dead with the country divided and well armed. In response, the United Nations and various countries have attempted to broker a peace deal. The government and opposition have since agreed to stop the fighting, but many fear the ceasefire will not last. With millions being forced into refugee camps, and the country teetering on the edge of ethnic warfare, the future of the world’s newest country remains bleak.