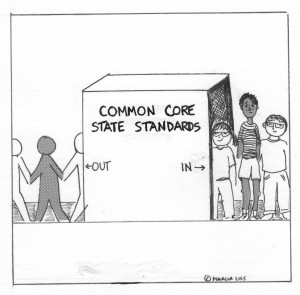 Saturday, January 18, Oneonta High School hosted a forum on the state of education in New York. The event’s turnout and morale were low relative to the November 6 forum held on the SUNY Oneonta campus. Still, despite snowy roads, the meeting drew dozens of educators, students and parents into the Oneonta High School auditorium. The forum focused on reform and resistance to New York education standards, specifically the controversial Common Core and standardized testing.
Assemblyman Pete Lopez, Senator James Seward and Congressman Chris Gibson were in attendance. Assemblyman Lopez claimed that Governor Andrew Cuomo is merely nibbling around the edges of education reform despite calling himself a student advocate. Senator Seward blasted the Regents and State Education Department saying they had badly mishandled the situation. Seward explained that he planned to meet with New York State Education Commissioner King. A man in the crowd shouted at the senator saying, “Give ‘em Hell, Jim!” The Senator replied that he was just getting warmed up.
Congressman Chris Gibson played a convincing role as “concerned politician” saying “We hear you” with as much sincerity as he could muster. He addressed the teachers in the crowd saying “You guys know you’ll never get rich, but you’re rich at heart” patting his chest with a smile. Later in the meeting Gibson would take the microphone again to call for non-partisanship as if anyone had suggested otherwise. He repeatedly referred to a defensive “kung-fu” stance which should be avoided if success is to be achieved and Common Core defeated.
Keynote speaker Dr. Carol Burris, named 2013 Principal of the Year, was unable to make the drive from Pennsylvania so accommodations were made for her to speak to the crowd via Skype. Despite some technical glitches, Burris came on screen to tell the audience about the rushed standards and grading system created by entrepreneurs rather than educators. David Coleman, who Burris appropriately described as an “education entrepreneur”, rakes in a lofty annual salary of $750,000 working for the College Board.
The various speakers of the day offered suggestions on how to join the reform movement that included everything from wearing green laces as a symbol of solidarity, to writing their representatives and having their children “opt out” of standardized tests. Mr. Tim Farley, Principal of Ichabod Crane and SUNY Oneonta alum, gave a list of reasons why parents like himself have decided to opt their children out of standardized testing including the high levels of anxiety associated with standardized tests, the unreliability of the tests as a measure of academic progress and a little bit of old fashioned civil disobedience. Icahbod Crane had over 200 students opt out last year, about 26 percent of the student body. Mr. Farley quoted Albert Einstein saying “I believe in standardizing automobiles. I do not believe in standardizing human beings.” Mr. Farley claimed the new standards are driving the best teachers out of the profession, adding that more and more teachers are retiring early to avoid the Common Core and its scripted modules. He joked that the length of new grade 3-8 standardized tests rivals that of the LSATs. Mr. Farley went on to tell the audience how to opt their children out if they decided to do so, assuring the crowd that opting out would not hurt their child, their child’s teacher or the school. Farley wrapped up his speech by discussing the corporatization of the American public education system, advising anyone who holds Pearson stock to sell.
The last and perhaps most sincere speaker of the afternoon, Mr. Sutliff, a former librarian and principal, lamented the loss of regard for fiction in today’s schools under Common Core. Having been in the education business for over thirty years, he wondered aloud why kids can’t be kids. He left the stage after saying that kindness is not quantifiable and cannot be sent into the state for analysis, but is the thing that matters most to the students.