Don’t worry New York Ranger fans, the King is back for the long term. On December 4, all-star goalie Henrik Lundqvist signed a seven-year contract extension, worth $59.5 million. The salary cap hit will be $8.5 million per season, leaving Lundqvist, Rangers General Manager Glen Sather and the garden faithful with a contract that everyone deems fair.

Ever since his rookie year in the 2005-2006 season, the seventh-round draft pick has been nothing short of a savior to the Rangers franchise. Throughout the Lundqvist era, the Rangers have struggled to score, but the career 2.26 goals-against average of Lundqvist has kept them competing in games that they had no business winning.

Lundqvist is second in Rangers history in wins (284), trailing only Mike Richter (301) and second in shutouts (47), just two behind Hall of Famer Eddie Giacomin (49). As long as no serious injuries occur, Lundqvist will break both of these records, leaving him as the greatest goalie in Rangers’ history. “King” Henrik’s best season so far was undoubtedly the 2011-2012 campaign in which he compiled a 39-18-5 record, with eight shutouts, a 1.97 goals-against average (GAA) and a .930 save percentage. During that postseason, he was even better, with a 1.82 GAA, a .931 save percentage and two Game 7 victories, making it to the Eastern Conference Finals, before losing to the New Jersey Devils in six games. Because of this effort, Lundqvist was awarded the Vezina Trophy, given to the best goalie of the season.

But some fans think that the Rangers overpaid for Lundqvist, because he has had a tough start to this season. Through 20 games, he has an 8-11 record, with a 2.51 GAA and a .917 save percentage. With these good (but not grea)t stats, along with the surprising play of rookie goalie Cam Talbot, the idea was floated around on Rangers and hockey blogs that Lundqvist should be traded for another legitimate score.

This idea was questionable at best. While there is no denying the start to Talbot’s career has been impressive, through his first nine games, he has a 6-2 record, with a 1.79 GAA and a .934 save percentage; it is too early in his career to name him starter and push out an already established star like Lundqvist. Right now, with two goalies playing solid, Head Coach Alian Vigneault can afford to give Lundqvist more rest, since this is an Olympic year.

If the Rangers want to make the playoffs this year, their offense needs to be better. Their 2.25 goals per game is ranked 26th in the National Hockey League. Players like captain Ryan Callahan, Derek Stepan, Carl Hagelin and Derrick Brassard need to start putting the puck in the back of net more. The only players who are showing offensive consistency are forwards Rick Nash (ten point in his first 13 games), Chris Kreider (a hat trick against the Vancouver Canucks) and defenseman Ryan Mcdonagh (16 points this season.)

In his press conference, Lundqvist said, “I want to be a Ranger for life. It’s a big thing that became really clear to me. It was how they treated me, from coaches to the players to the city and fans. It’s been incredible. To picture myself anywhere else, it was wrong.” Lundqvist and the city that never sleeps are a perfect match for each other. 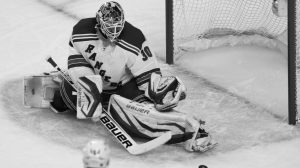