It’s becoming harder and harder for people to unglue their eyes from their phones and stop their thumbs from frantically tapping letters on that small rectangular screen. It seems as if texting someone that isn’t present at the moment has become more important than taking in surroundings and engaging in face-to-face interactions.  Besides bumping into people or walking into walls due to your inattention because a friend just texted about her crush, texting can’t be that detrimental, right? Wrong.  According to the AT&T Texting and Driving Campaign ,texting and driving has killed an estimated 448,000 people a year, and the numbers are rising.
According to the AT&T Texting and Driving Campaign, drivers under the age of 20 are the highest percentage of distracted drivers. 16 percent of all drivers younger than 20 who have been involved in fatal crashes were reported to have been distracted by cell phones while driving.  A disturbing 60 percent of drivers have admitted to using their cell phone while driving. This includes texting, surfing the internet, making a phone call and eve 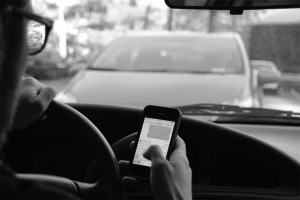 n checking the weather.  The question is, why can’t we just put our phones down and concentrate on the road?
Several different tactics are being used to try and stop the increasing amount of deaths from texting and driving. For instance, phone companies have different applications that can be downloaded on phones and turned on while driving.  You simply turn the app on when you’re in the car, and if anyone sends you a text during that time a message is automatically sent to them saying that you are driving and will get back to them as soon as you have reached your destination.  Also, there are rest stops across the country that are called “text stops.” Drivers who are compelled to look at their phones frequently can stop at the text stop and safely check their phones.
Spreading awareness of the serious danger and consequences of texting and driving has become more prominent as well. Public service announcements show loved ones sharing their story about how a family member died from answering a text while driving, or a mother sitting with her six-year-old son while he is in a coma because of a texting driver. The media is simply trying to get it through people’s heads that there are certain times where putting a phone away is mandatory and important.
So the next time you get in your car to drive you’ll have to decide: are you going to be a part of the 60 percent of drivers who use their phones, even when 84 percent of them know it’s dangerous? Or will you rise above the majority, unglue your eyes from that small screen and pay attention to the world around you? Don’t include yourself in the 22 percent of people who say they text and drive. Crank up the radio, roll the windows down and enjoy the ride.