Since their last Superbowl victory in 2004, the New England Patriots have enjoyed a winning record in each preceding season leading up to the 2013 campaign. While they have had great success during the regular season, the team has not brought another Lombardi Trophy to Foxboro, including losses in the big game in 2007 and 2011. The 2013 Patriots have looked like a polar opposite of the past decades’ teams, mainly due to losses in free agency and injuries. But they are still sitting pretty with a 7-2 record through the first 10 weeks. Through the first eight weeks of the season, the Pats offensive numbers were below average, mainly because of injuries to star tight end Rob Gronkowski and newly acquired wide receiver Danny Amendola (who just so happens to be the replacement of All-Pro wide receiver Wes Welker.)
The Patriots have also dealt with a youth movement this year with two rookies starting at wide receiver and not to mention having one of the youngest defenses in the NFL. Speaking of Bill Belichick’s defense, unlike previous years, this unit is what has kept the Patriots winning games while their offense has struggled with building chemistry. New England is 21st in total defense this season, which is better than their usual bottom three finish. They are tied for eighth in the league in sacks with 29 through nine games. Although the defense has been hit with season ending injuries to star players Vince Wilfork and Jerod Mayo, Belichick has installed a “next man up” attitude for his players, meaning that it doesn’t matter if you are a rookie or a veteran, just do your job. The Patriots defense has done just that so far.

Now comes the big question: can this Patriots team make a run for the Super Bowl this season? Will they acheive football glory? In order for this team to make it to the championship, they need to continue to build chemistry on offense and continue to get healthy on defense. Who they play in the playoffs will be the key factor in determining their fate, especially if they can play against teams like the Indianapolis Colts, New York Jets or the Cincinatti Bengals. If New England has to go through teams like the Kansas City Chiefs or Denver Broncos, it could be another early exit for Brady and the Pats. With that said, there is no reason for anyone to think that New England doesn’t have a chance to make it to the Super Bowl, but we have seen some strange things happen in the NFL in recent years. 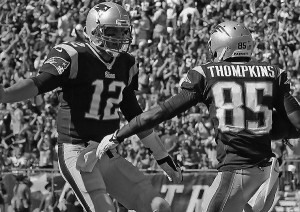