On October 9, 2012, Malala Yousafzai was riding home on the school bus in her village in northwestern Pakistan. For Yousafzai, riding the bus and being able to attend school was not something to be taken for granted. Three years earlier, she and all of the girls in her village were not allowed to attend school. The ban on female education came from the group in charge of her village, the Taliban. By 2012 Yousafzai was able to attend school once again when the Pakistani government launched a military offensive to regain control of Yousafzai’s province, thus allowing the girls to return to school. However, the Taliban still remained in the shadows.  It was one of the Taliban’s fighters that stopped Yousafzai’s bus on October 9, boarded the vehicle, walked towards the fifteen-year-old-girl, raised his rifle, and shot Yousafzai in the face and neck.
The Taliban is an ultra-conservative Islamist terrorist organization with a strong presence in both Afghanistan and Pakistan. In Afghanistan, they are engaged in a bloody war against the United States and the Afghan government. In Pakistan, especially in the uncontrolled northwestern part of the country, the Taliban has come to control numerous villages and towns, introducing their strict laws and customs in the process. One law was the ban on female education. This was to be the fate of Yousafzai’s village in 2009 when the Taliban took control of her town. The young Pakistani girl decided to raise awareness for the plight of her village, anonymously writing an article for the BBC explaining the hardships of life under Taliban rule, with a special focus on
how the Taliban has banned education in order to maintain control.
Yousafzai achieved celebrity status in 2010 when the Pakistani army freed her village, thus allowing Yousafzai to return to school and come forward as the influential writer of the article. After doing so, she became the spokesperson for child education across the world. In response to the challenge of their authority, the Taliban responded by trying to kill the fifteen-year-old. However, Yousafzai was able to survive the attack and managed to make a full recovery at a hospital in England. After her recovery, Yousafzai became even more vocal in her cause. In the process, she received numerous awards across the world for her activism in the name of peace through education. This past October, the young advocate released her memoir “I Am Malala: The Girl Who Stood Up for Education and Was Shot by the Taliban.”
Although widely read in many countries, disturbingly her native country of Pakistan  has not reacted well to the book. More than 400 private schools in Pakistan have announced that they intend to ban the book from their libraries, with the All Pakistan Private School Association claiming that the book “is representing the west, not us,” as the grounds for doing so.
Yousafzai has become a symbol of our time. Passionately fighting for every child’s  right to an education, with the end goal being peace through understanding. She has been shot and forced to flee her home in the name of this cause, but still continues to be a vocal advocate. However, the fact that her home country is banning her book proves that the road to universal education will be a long and arduous fight. 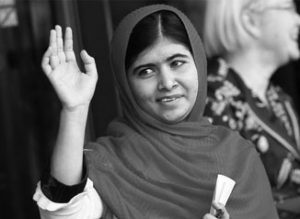