Push-up. Minimizing. Padded. Full-coverage. Strapless. Backless. Sports. Front-closure. Back-closure. Demi.
If you identify the above list as a random collection of oddly chosen words,
you’re either an extremely clueless male or an individual (of either gender) who was teleported from the nineteenth century or earlier. As for you modern-day readers, this compilation of bra types, or more specifically, the fact that it’s only a small subgroup of all bra choices, is probably unsurprising, especially for all you ladies. How often do we take for granted our wide selection of devices to “keep the girls in” (or show them off, depending on what look we’re going for?) With a vast array of styles ranging from Victoria’s Secret’s Bombshell to Bali’s Passion for Comfort, there’s a bra to suit each of our wardrobe and functional needs, plus an extensive and specific sizing system to help us tackle each one. But you pre-modern teleportees will know that our ancestors’ needs were—well, less adequately covered.
An effort to confine the coconuts dates back to ancient times, when many women evidently wrapped themselves in cloth to suppress their chests from being an inconvenience. With limited resources, it’s plausible why this would be a logical solution (some lady probably went jogging and grabbed the nearest rag in a state of perplexity), but—call me crazy—the thought of binding myself in complete concealment wouldn’t be a confidence booster. Things apparently became a little less booby-trapped as the corset gained popularity throughout the Middle Ages and Renaissance but, big shocker here, this innovation was really only available to wealthier women. Despite the relative breast liberation that the corset offered, the damn thing was underwired with whale bones and was so tightly laced-up that safety from organ damage was not guaranteed, let alone the freedom to take a breath. It took a war for more accommodating chest apparel to become widespread. Literally – World War I limited the amount of metal available for corset-making. Go figure.
Most fashionable women in Europe and North America were wearing something comparable to today’s brassieres by the time the war ended in 1914, thanks largely to a design patented by Germany’s Sigmund Lindauer. This trend consequently spread to Asia, Africa and Latin America, and the United States. Mary Phelps Jacob is credited with patenting a design of the modern bra the same year World War I ended. An efficient sizing system, however, was not constructed until the 1930s. That meant there were about twenty years undoubtedly filled with, “Do they, um, look okay?” “No.” It was a harsh world.
So all you ladies who take your bras for granted, have a moment of reflection the next time you pull your straps up. Think of all our predecessors who suffered the torment of unflattering, uncomfortable and even dangerous breast-wear. And above all, be grateful that the female race was able to face this oppression and say ta-ta. 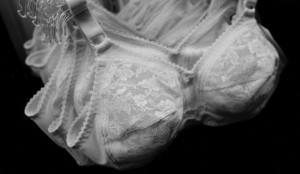