Ben Winters, Staff Writer
As people get busier and busier with every new technological development, the way people stay informed is also changing. To put things in perspective, surveys have found that 16 percent of American adults use twitter and of those, 52 percent use it as a main news source, reducing news stories to 140 characters or less. News has become abbreviated and instantaneous, a combination that risks sacrificing in-depth, nuanced journalism.
“Traditional” television news sources, such as MSNBC, FOX News and CNN have dumbed down news stories in an attempt to maintain their dwindling viewership. So where is the “real” news that you know is reliable? The good old-fashioned news that is just news. Jon Stewart, the host of Comedy Central’s The Daily Show with Jon Stewart, shows a clip from CNN of Wolf Blitzer interrupting a specialist in the middle of an intellectual discussion and asking, “Is this a good thing or a bad thing?” News today doesn’t require much brainpower from the audience when the topic never gets fully discussed. In this black and white world, news has been turned into an overly partisan, simplified version of the truth. 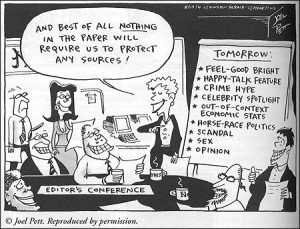 The state of the nation’s economy combined with the rising popularity of online news sources has lead to massive reductions in budgets for news stories, limiting their ability and tendency to dig deeper into news stories and produce more informative news stories.
According to the Pew Research Center’s Project for Excellence in Journalism, the cable channels that brand themselves around well-reported news had to cut produced story packages nearly in half from 2007 to 2012, while in the same time frame interviewing, the least expensive and most opinion-based way to report the news, has doubled. Pew Research Center also reports that viewers find the three major cable channels to be mostly based on opinion as opposed to factual reporting. Pew reported that an astounding 85 percent of MSNBC’s programming is solely commentary, and for both CNN and FOX News it was approximately 50/50. When something is at least half commentary or opinion based, how are viewers supposed to take the “news” seriously?
The news is an important part of our lives and integral for us in becoming more balanced individuals and a more educated society. When there is nothing in between The Daily Show and C-Span, how are people expected to become fully educated, well-rounded members of society? Unless these news organizations get back to reporting news that is full and factual yet still concise and entertaining, they may end up looking like a mix between Kathie Lee & Hoda and the Onion News.