The major details surrounding Richie Incognito and Jonathan Martin still remain a mystery. Fans know Incognito was recently suspended indefinitely by the Miami Dolphins under alleged harassment charges towards teammate Jonathan Martin. It has been made clear that Incognito said awful things regarding Martin’s race, and even made threats to his family.

Those reasons alone are enough for fans to dislike Incognito, and for his suspension to be justified. But what remains a mystery is what pushed Martin over the edge to the point of quitting the team. Martin has made it clear he intends to sit out the remainder of the 2013 season, and the Dolphins have put Martin on the NFI (Non-Football Injury) list for his emotional and mental issues. But if Martin’s issues were purely against Incognito why didn’t he just do whatever he could to expose the Dolphins front office to Incognito’s threats and get him suspended or expelled from the team?

The severity is also not so clear. There could have been more going on to drive Martin away from the team. Incognito has argued he merely was following Coach Joe Philbin’s orders to “toughen him up.” Both offensive linemen, Incognito and Martin had all of the same drills together and were rarely separated. What is the only definite thing fans know? Incognito  took it too far.

Situations like this force fans to analyze the concept of hazing. Traditionally, veterans haze rookies to establish their presence and continue the hierarchy of social status in sports. That’s true on every level, even in high school. Freshmen clean the field while seniors go to their big lockers. Heck, even little league baseball. If you strike out, your teammates typically let you know you blew it and aren’t always nice about it. The truth is, the amount of pressure surrounding athletes on any level is intense. They must gain the approval of coaches, fans, teammates and even themselves.

Perhaps Incognito’s constant ridiculing and hazing drove Martin to the point of depression. If that’s the case it’s a textbook example of bullying someone to the point of damaging or bruising their self-esteem. This extremely odd investigation has brought up an entire whirlwind of possibilities. Should the league put regulations against hazing in sports? Did Martin have issues prior to his altercation with Incognito? What will the details of Incognito’s punishment be?
Whatever the results of this unfortunate dilemma, fans probably realize these moments can sometimes be quite common in sports. Any athlete that played sports at a young age can recall a time someone on the team quit because he got picked on for not being good enough. Seeing this at the NFL level may come across as shocking, but former players are anything but shocked that this occurred.

Former NFL defensive end Ryan Riddle is now a blogger for “Bleacher Report”. In a recent article regarding Martin, he writes, “Underneath the lights, behind the glamour and just below the fame of professional football exists a culture and environment so harsh and so unforgiving that it could never hold up to the political correctness of a normal workplace scenario.” Riddle believes that Martin is going through his own personal issues and suggests that it just doesn’t bode well for a football player to be in that situation. He explains that Incognito is, in reality, the type of player that coaches look for: aggressive, tough and intimidating.
The details of this situation will be revealed as time goes on, but hopefully this unique case will not cause a reform major enough that it could alter the culture of football. Riddle writes, “If nothing else, perhaps there’s one silver lining that can emerge from this situation. From here on out, any player who even contemplates crossing that line of bullying will probably think twice.” 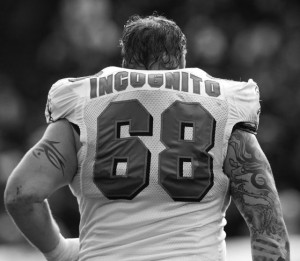