Taylor Hoysradt, Staff Writer
After a tumultuous 2-14 season in 2012, the Kansas City Chiefs have stormed back in 2013, winning their first nine games. A good amount of their success can be attributed to new Head Coach Andy Reid, but this team has thrived due to more than just a coaching change. In 2012, the Chiefs ranked in the bottom half of every offensive category including scoring, passing yards and a horrible turnover margin. Now with the arrival of quarterback Alex Smith, the Chiefs now have an offense that is balanced and doesn’t turn the ball over. Smith isn’t a guy who is going to put up numbers like Brady, Brees, Rodgers, or the Mannings, but he has the ability to take total control of a game and not make any mistakes. Kansas City is still in the lower half in passing offense this season, but they are scoring more points and committing fewer turnovers. The combination of Smith and the always-deadly All-Pro running back Jamaal Charles has become one of the more potent QB-RB duos in the league this year and they show no signs of slowing down.

Along with the success of the offense, Kansas City’s defense has established itself as one the most intimidating units in the league. The most significant turnaround has taken place in the scoring department as KC is giving up less than half as many points in 2013 (12.3 per game) as they did in 2012 (26.6 per game.) The front seven led by Tamba Hali, Dontari Poe and Justin Houston propelled the Chiefs to leading the NFL in sacks with 36 through nine games. The secondary has also shown up by intercepting 12 passes so far, which is ranked second in the league. Kansas City has had the defensive talent in place for a few years now but their offense had continually dragged them down by not staying on the field long enough and not putting up enough points. Now that the two are starting to compliment each other and pick each other up, you can see the difference.

The only concern with the Chiefs is how easy their schedule has been. Kansas City’s competition through the first nine games had a very unimpressive combined record of 26-49. Kansas City’s last five games have been especially easy considering they played against a backup quarterback (Ryan Fitzpatrick, Case Keenum, Jason Campbell and Jeff Tuel) in four of those five games. We will wait and see how they handle playing Denver twice in three weeks and if they can make a run in the playoffs. 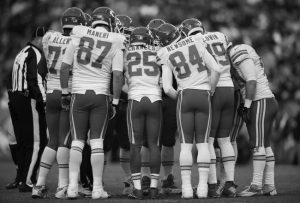