The Indiana Pacers are back on the map and are in the process of putting the National Basketball Association on notice. This Indiana team has played second fiddle to the reigning defending champs for far too long.
In the 2011-2012 season, the Heat knocked out the Pacers in the second round. The Pacers attempted to distract Miami by causing conflict on the floor: getting in their faces, provoking the Heat players and simply doing everything in their power to not only beat them, but abuse them while doing so. None of these theatrics worked, as Miami disposed of this young Pacers team in just six games.

The following season, Indiana and Miami met in an Eastern Conference Finals showdown. The Pacers were fresh off their series win against the New York Knicks, in which they bullied them in the post. Roy Hibbert and David West were too much for the Knickerbockers to handle.

There’s no question that Miami and Indiana hate each other­­­­— it made the seven game series in the ECF more entertaining. Paul George emerged in this series, showing the league that he was a destined superstar. Although the Pacers lost in seven, they made it clear they weren’t going anywhere and that they were going to be a contender in the NBA for years to come.

The NBA season is a couple of weeks old and so far the Pacers have been the best team. Yes, it’s early, but everyone knows: the Pacers are coming. Paul George has accepted his role as Indiana’s best player. With David West and Roy Hibbert patrolling the paint, this team will be tough to stop inside. Not only are they the league’s best defensive team, but their once struggling offense is now finding their way under the leadership of Coach Frank Vogel.

After exiting the playoffs these last two years at the hands of Miami, this will be the year they say “we have had enough.” With their speed, defense and depth, this young team will become an emerging threat in the East. There may be moves to make in the front office. Danny Granger used to be their best player; he was a phenomenal scorer and could play solid defense. But after injuries have derailed him these past few seasons, the Pacers should cut ties with him. He would be excellent trade bait due to his expiring contract. Many teams will be able to not only benefit from the contract, but from his talent and abilities as a player.

Indiana will be a much better team without him. While he’s been hurt, George has developed into one of the best players in the league. His growth was stunted by playing side by side with Granger. Now he has moved to the small forward position and blossomed into a promising player.

If the Pacers want to secure their spot in the NBA Finals this year, they’re likely to need a true point guard. George Hill is not a point guard by trade and there is little faith in his ability to be the floor general for this Pacers offense. He would be a great player off the bench along with Luis Scola, but as a starter, he has yet to impress. Adding a pure point guard who could run the offense, establish a consistent tempo and put George, West and Hibbert in their best positions to score would be an amazing accomplishment.

Bottom-line, the Pacers are legit, and they’re here to let the NBA know that they’ll be competing every single year for a long time. Paul George will be a superstar in a few years, if he isn’t already. There’s a chance that he can dethrone Lebron James and capture his first MVP award. David West is the leader on this team as the veteran with experience. Roy Hibbert can very well be the defensive player of the year as he proclaimed on Twitter. Offensively, he is very much improving.
I know this team may not receive the ESPN hype, or make the headlines every day, but if there was ever a time to pay attention to the Pacers, it’s now. 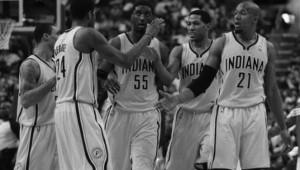