On Saturday November 9, The Oneonta State Women’s Soccer Team defeated Geneseo 4-1 to claim the SUNYAC Conference Championship. The scoring started in the 20th minute, when Karly DeSimone sniped the ball just inside the post, which the Geneseo goalie had no chance of stopping. Just four minutes later, Elise Moinzedah was the first person to a loose ball off of a corner kick and put the ball into the empty net. At the end of the first half, Oneonta had a 2-0 lead and controlled the ball for most of the half.

The second half was not much different. In the 49th minute, Liz Lasota scored directly off another corner kick, making the score 3-0, putting Oneonta on their way. But the scoring didn’t stop there. Just three minutes later, Jessica Lyden scored the fourth goal of the day off of, you guessed it, a corner kick. Amanda Regensburger crossed the ball, which landed directly on Guglielmo’s head. The shot clanked off  the crossbar where Lyden put the rebound in the back of the net. Oneonta peppered the opposing goal with 10 shots, putting constant pressure throughout the contest.

In the 73rd minute, Geneseo finally got on the board. Erin O’Connor beat goalkeeper Kelley Murphy for the Blue Knights’ only goal. Other than that one goal, Murphy was great. She made three saves and was noticeably confident in goal, directing the defense and starting counterattacks with her throws when she got possession of the ball. This was Murphy’s eighth win of the season.

When the final whistle blew, there was bedlam at Red Dragon Field. The Lady Red Dragons were champions and booked their automatic ticket to the Division III NCAA Tournament. DeSimone was named Most Valuable Player of the tournament and was also named to the All-Tournament Team, along with Lasota, Krystal Scott and Erica Berry. They went 12-4-3 during the season, showing just how deserving this championship was.

Oneonta will play Farmingdale State on November 16 to start their NCAA Championship run. The game will be played at William Smith College in Geneva, New York. This will be the 14 appearance all-time in the NCAA Tournament, but their first since the 2010 season. They hope to repeat what happened in 2003, when the Lady Red Dragons won the National Championship in the finals against the University of Chicago. 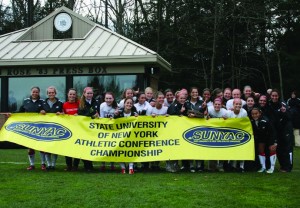