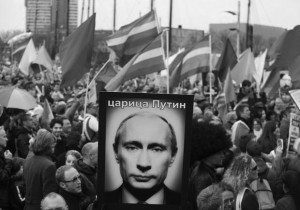 As Illinois becomes the 15th state to pass a bill allowing same-sex marriage, Russia struggles to provide even the most basic rights for its gay citizens.
In June, when Vladimir Putin was re-elected to the presidency for a third term, he passed a ban on so-called “homosexual propaganda.” This law, which is intended to protect the youth from exposure to nontraditional relationships, prohibits symbols like the rainbow flag and gay pride parades. The law is vague in many of its conditions, so much so that parents are not sure if they can even discuss homosexuality with their children. Anyone in Russia suspected of making comments in support of gay rights within earshot of an underage citizen is subject to arrest and fines of up to 50,000 rubles. The passage of this law caused a spike in violence against the Russian homosexual community. The weeks following the passage resulted in 20 attacks on homosexual citizens, only four of which were investigated. Only one of the reported cases made it to court.
A month after the law banning “gay propaganda,” Putin passed a law that prohibits gay couples of any nation from adopting Russian-born children. He extended the law to include any single parent or couple that lives in a nation where marriage equality exists at any level. Only a few days earlier, on another attack on the gay community around the world, Putin signed a law that gives police the right to arrest and detain any tourist thought to be homosexual or even “pro-homosexual” for up to two weeks.
The law comes at an especially controversial time, with the Winter Olympics in Sochi being only three months from now. With this law enacted, any Olympic athlete, trainer or family member that is accused of being gay or pro-gay could be held in detention for fourteen days. Already, prominent gay-rights activists, from Russia and abroad alike, have called for a boycott of the winter games. Johnny Weir, an openly gay Olympic figure skater, disagrees with these activists and encourages athletes to go on with their sports.
Weir said that boycotting the games would only hurt the athletes who have given their lives to the sport and added, “I think being at the Olympic games, for me, and possibly winning a medal, and being one of the only out gay Olympians, would do so much more for the Russian LGBT community than us sitting back and not being present.”
Russia has a long-standing history of homophobia. It was not until 1993 that homosexuality was decriminalized, and remained on Russia’s list of mental illnesses until 1999. Even after its decriminalization, only 16 percent of the country believes that homosexuality should be accepted by society. The general dislike for homosexuality has caused a feeling of shame for most gays and lesbians in Russia, some of whom say they aren’t openly gay to protect the dignity of their parents rather than to protect themselves from the law.
The terrifying truth that being outwardly gay can lead to violence or imprisonment has kept many gays and lesbians hiding the truth about who they really are. Many want to leave the country and have been quoted saying they knew they would die alone if they didn’t. As in the U.S., some Russians seek out each other on online dating sites, although these sites have become another source of terror for homosexuals, since some of the website users are only “hunters”, who use the Internet to find targets for their violence.
Putin’s plans for suppressing homosexuality do not seem to be at an end, and in February, at the height of the Winter Olympics, Russian lawmakers will meet to discuss the possibility of removing children from a homosexual parent’s custody. The possibility of this law being passed begs the question, “Just how far will Putin go before other nations try to stop this onslaught of human rights that is so obvious in Russia?”