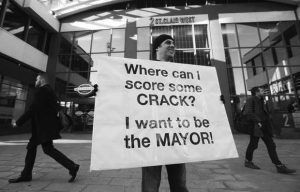 As mayor of Toronto, Canada’s largest city, Rob Ford has a lot of responsibilities on his plate. The city is Canada’s economic hub, as well as the fifth largest population center in North America. Therefore, it can be reasonable to presume that the person who is in charge of running such an important metropolitan area is a clear headed and effective leader. However, many might argue that Rob Ford falls short of living up to this standard. Since taking office in 2010, the current mayor of Toronto has been known more for his controversies than for his leadership, with drunken stupors taking place more frequently than policy change and political progress.
In 2012, the mayor of Toronto arrived at a city fair in order to meet and greet his constituents. The only problem being that he did so with his blood alcohol content above the normally acceptable limit. His impaired judgment and slurred speech became the talk of the town. This past August, the debate to legalize marijuana in Canada was gaining momentum after some states in the U.S. legalized its use. Four major political heads of Canada spoke out in favor of legalization. It came as no surprise that one of these politicians was Rob Ford. When asked in an interview if he had ever used the illegal drug, the mayor laughed while responding, “Oh yeah, I won’t deny that, I’ve smoked a lot of it.” For all of his public intoxication and blunt honesty the people of Toronto didn’t show too much concern, as long as the city was being run properly. However, this past May heads began to turn, not only in Toronto but also around the world, when rumors surfaced that there was a cell phone video supposedly showing Rob Ford at a party, complaining about a political opponent and then proceeding to light and smoke out of a crack pipe.
When the rumors surfaced, the Mayor immediately denied them as ridiculous. However, that didn’t stop the Toronto police from looking into the matter. This past week, the police report concluded that the video did in fact show Rob Ford smoking crack cocaine. Since then, the city has risen into an uproar with protestors and politicians alike demanding that the mayor resigns. Despite the mounting pressure, Rob Ford has so far refused to step down, stating, “I was elected to do a job and that’s exactly what I’m going to continue doing.” The mayor described his actions as “probably taking place during one of my drunken stupors” and that the revelations will not stop him from remaining mayor, and that his plans for reelection will not change as well.
Despite the demands from his constituents that he resign for the time being, Rob Ford will weather the political storm and continue on running the city of Toronto. While a recent Health Canada survey stated that only one percent of Canadians have ever tried crack cocaine, the people of Toronto many have to cope with the fact that their mayor is one of them.