If you haven’t worked in the food industry before, allow me to shed some light on it for you: it’s socially taxing, physically exhausting, demanding and chaotic. Needless to say, it’s not for everyone, and it definitely wasn’t for me.
Over the summer, I worked as a hostess and a busser at a chain restaurant in my hometown. What was supposed to be a fun and positive experience soon turned into something I wasn’t quite prepared for.
When I was first hired, I was promised a full-time job. I was told that during both of my interviews. I even called them back just to make sure. However, once I came home for the summer and started working there, I was told that I would only be getting 15 to 20 hours of work a week, at the most. At that point, it was too late to find another job.
I had been looking forward to going home for the summer and thought it was a job I was really going to enjoy. Instead, I got stuck with a staff that complained incessantly, talked behind each other’s backs and a boss that didn’t even know I existed.
I was yelled at by customers and snapped at by catty waitresses. I rolled more sets of silverware in one summer than I have in my entire life. I dropped countless plates and glasses on my feet. I cleaned unimaginable amounts of ketchup and mashed potatoes off of booths, the remains of a family dinner including a toddler who apparently hadn’t been taught his table manners yet. Ever seen Hell’s Kitchen? Go behind the swinging doors and into the kitchen of a chain restaurant on a Friday night and that’s what you’ll get. I watched my boss eat French fries off of a plate that was about to be sent out to a customer, and I listened to countless hours of waiters griping about how they hadn’t been tipped enough by a table, even though they forgot to enter the order for the family’s appetizer.
So even though I got stuck with a summer job that I dreaded, where I was paid five dollars an hour, plus 10-20 percent of tips to clean up shrimp fondue and serve spicy fish tacos, I learned so much about myself and what I was capable of. I learned how to stand up for myself and know I’m a stronger person because of it. I was put in a stressful environment that I hadn’t been prepared for, but I was able to stick it out and follow through in the end.
Now whenever I go to a restaurant, I think of my experience and how differently I view the food industry. I tip well and I always say “thank you.” I see the girl rushing around to clean every table in time, accidentally spilling soda all over the floor along the way and remind myself that I was once her. Whenever I am seated at a table when I’d rather eat at a booth, I’ll know there’s a seating chart system they follow, one that makes sure every waiter gets assigned enough tables. And whenever I see a family getting ready to eat, I tell myself that when I have kids someday, I’ll make sure they know it’s not okay to throw grapes and broccoli at each other. 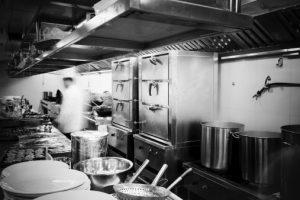